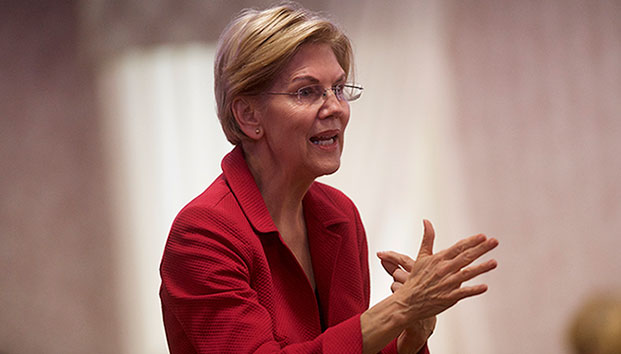 (SAN FRANCISCO) — More than a dozen presidential candidates touch down in California this weekend for a series of events that could highlight their progressive bonafides in what’s considered ground zero for connecting with the party’s most liberal voters.A forum organized by the progressive grassroots organization MoveOn will provide a liberal bastion for candidates to lay out their policies before voters playing the role of bulwark for left-wing ideas.”I think California is kind of the tastemaker or the trendsetter of what’s going to be the general public sentiment of progressivism going forward,” said Anna Zarucco, a public relations consultant with MoveOn.And this year, because California is scheduled earlier in the country’s primary schedule, its role is expected to be increasingly important — both in the primaries and in the progressive-moderate divide splintering the Democratic Party.The conversation on the far-left of the party has so far been dominated by a few names, primarily Sens. Bernie Sanders of Vermont and Elizabeth Warren of Massachusetts. In addition, six other candidates will attend the forum Saturday, including Sens. Cory Booker of New Jersey, Kirsten Gillibrand of New York, Kamala Harris of California, Amy Klobuchar of Minnesota, former Rep. Beto O’Rourke of Texas and former Obama Cabinet official Julián Castro.The state’s Democratic convention, also taking place this weekend in San Francisco, will draw a more varied crowd of party faithful.Sanders drove policies like Medicare for All and free public college into the mainstream Democratic conversation during the 2016 race, and ahead of 2020, he’s set himself apart with his support for felon voting rights while incarcerated, contrary to the traditional notion among some candidates that felons should only regain the right to vote after they are released from prison or have completed their sentences.With Warren’s entry to the race, some progressive stakes have been shaken up even further, including on some policies that cross over with Sanders. Warren’s higher education policy, for example, calls for free public college, but also includes debt cancellation for nearly all Americans still paying off their bills.In a May interview with ABC News, Sanders acknowledged the two candidates’ similarities, calling Warren a friend.”We have differences; we agree on a lot of things. We’ll let the voters sort it out,” Sanders said.But Sanders and Warren are part of a growing field that continues to evolve on progressive issues.And despite the hold Warren and Sanders seem to have on the left flank of voters, it’s still anyone’s game, Zarucco said, naming candidates and policies that excited her organization’s members.”If we learned a couple things from 2016, it’s there’s no candidate too small and there’s no policy that’s too unrealistic,” Zarucco said. “I think this is a really big chance for tables to turn in terms of approval ratings, polls and popularity.”A few candidates that Zarucco said members of her progressive organization are eyeing include Sen. Kirsten Gillibrand of New York, who was one of the first candidates to announce a plan to legalize abortion nationwide in the face of new restrictive abortion laws passed around the country, and Sen. Cory Booker of New Jersey, who recently announced an ambitious plan for gun control that pushed for federal licensing.But there will be an abundance of litmus tests that liberal California voters want to see their candidates hit, including women’s health, Medicare for All and immigration, Zarucco predicted.Candidates such as former Rep. Beto O’Rourke and former Gov. John Hickenlooper unveiled immigration proposals ahead of the weekend’s events, which also includes an immigration forum in Pasadena.Moderates touching down this weekend include Maryland Rep. John Delaney, who last week rolled out a climate change proposal that is likely to get critical reactions from progressive climate change activists for its inclusion of a carbon fee program, and Klobuchar, who has not endorsed Medicaid for All and does not want to get rid of private health care right away.Klobuchar, who will attend the MoveOn forum Saturday, has also showed a tempered reaction towards the Green New Deal, an environmental plan put forward by progressive Democrats.Delaney slammed the proposal, calling it “about as realistic as Trump saying that Mexico is going to pay for the wall. Let’s focus on what’s possible, not what’s impossible.”Notably absent from the California events this weekend is former Vice President Joe Biden, which will perhaps leave a window for other party centrists to make their platforms heard.The former vice president’s team has said he will be visiting the state “in the coming weeks.”Copyright © 2019, ABC Radio. All rights reserved.