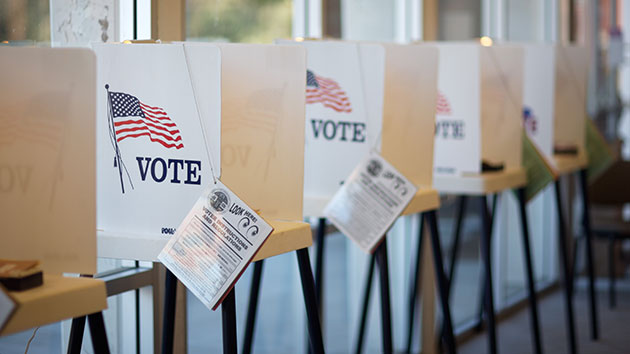 (NEW YORK) — Generations X, Y and Z voters cast more ballots than Boomers and older generations in the 2018 midterm elections, according to analysis from the Pew Research Center.

While Baby Boomers have long held political sway due to their large numbers, shifting demographics could position the three younger voting blocs to have a decisive influence in the 2020 election and beyond.

Gen Y, or “Millennial,” turnout nearly doubled from 22% to 42%. For the first time in a midterm election, over half of Gen X voted. And nearly a third of Gen Z — those ages 18 to 21 in the analysis — turned out for the first midterm election they were eligible to vote in.

Such a pronounced increase in turnout among younger generations led them to outvote their older counterparts.

The growth in millennials is attributed to younger immigrants entering the country, while the number of Boomers is in decline given mortality rates for the demographic, which exceed the number of older immigrants arriving to the U.S.

Steven Olikara, founder and president of the Millennial Action Project, a nonprofit organization aimed at bipartisan cooperation amongst young political leaders, said he was not surprised by the turnout of millennials in 2018 because they have been activated in unprecedented ways over the past few years.

“One of the most promising trends I’m seeing is an increase in civic engagement. Now, our generation recognizes it’s important to be involved in politics and to vote if we want to move the needle on issues we care about,” he told ABC News.

Olikara identified immigration as a central issue that activated the younger base to get out and vote in 2018.

“I think the response we saw was not so much a reflexively partisan issue, because millennials are the last partisan generation in America, but it was a response to the administration’s policies on immigration and refugees,” he said.

“The Trump effect has been huge in inspiring a large number of younger people to get involved for the first time,” stated Nathan Rubin, the founder of Millennial Politics, an organization shining a light on progressive candidates and causes.

Rubin added that movement surrounding gun reform led by groups such as March for Our Lives was pivotal in mobilizing young voters.

“The school shooting generation is coming of age,” Rubin said. “I don’t think there’s any way to deny the impact that the March for Our Lives group, as well as all other groups that are fighting for commonsense constitutional gun reform, have had.”

With the rise in numbers of these younger generations and more 17-year-olds turning old enough to vote, Joan Mandle, the executive director of Democracy Matters, a non-partisan organization committed to organizing students for democracy reform, highlighted the importance of youth voter registration.

Elevated political participation levels among younger voters could also shape the issues placed at the forefront of the 2020 election. Olikara cited how young voters have already mobilized around climate change and pushed candidates to articulate their position on it.

“It is largely a millennial left movement that has declared climate change to be part of the 2020 agenda,” he told ABC News.

Other issues he noted as important to young people include the student debt crisis, future of work and fixing our broken political system.

Olikara also offered some advice to presidential hopefuls looking to garner the support of younger voters.

“The most important thing to be doing right now is to be simply listening,” said Olikara. “Listen not only to the priorities that young people have, but also, and even probably more importantly, listen to how young people are framing the issues, because that’s how you’re going to overcome the partisanship and dysfunction in Washington.”Copyright © 2019, ABC Radio. All rights reserved.