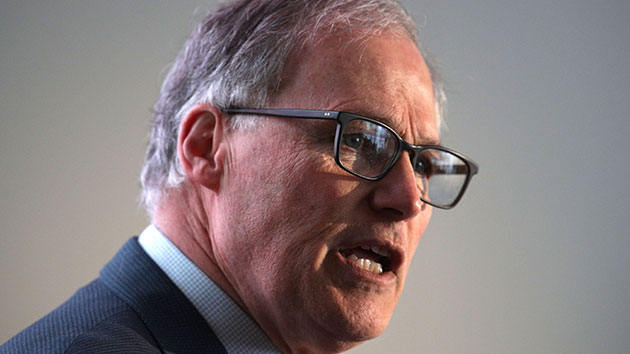 (WASHINGTON) — As Democrats vie for the 2020 nomination, many of them are talking about environmental issues in a way that conflates specific storms and extreme weather events with the broader impacts of climate change.While research has found the central part of the U.S. could see more intense heat and rain events as a result of changes to the climate, many scientists are reluctant to make immediate connections between the broader trend and specific extreme weather events. But some Democrats have made the connection between predictions of more severe weather events and the recent flooding and tornadoes in the Midwest, especially as they campaign in crucial primary states such as Iowa.President Donald Trump has often been called out for making the same error of connecting weather and climate, and using that to contradict climate science, such as implying that global warming could cancel out a historic cold front.More than half of Americans said they saw climate change as responsible for the severity of hurricanes in 2017, a big increase over the prior 10 years, according to an ABC News/Washington Post poll.Dana Fisher, a sociology professor at the University of Maryland who studies politics and climate change, said it’s not surprising Democrats are talking more about that connection as a way to distinguish themselves from Trump and make climate change a more tangible issue.”When people go to the voting booth, it’s very hard to get people to vote about polar bears and ice caps when they’re worried about child care and health care in their communities. But extreme weather actually takes climate change to the community level where people have homes,” she told ABC News.Fisher studies the Democratic base and says climate change has been rated as a priority in recent years, so it will be a critical issue for any Democrat to win the nomination.Multiple candidates reference extreme weather in their climate change platform. And, in recent weeks, at least two candidates — Gov. Jay Inslee, who has centered his campaign on climate change, and Sen. Elizabeth Warren — released videos connecting the storms and flooding in Iowa to climate change.Both messages make the statement that if the country doesn’t take some kind of action to slow the effects of climate change, the community will continue to see similar storms and floods.Mayor Pete Buttigieg has also made the connection in reference to flooding in Indiana, saying the image he thinks about with climate change is helping families in South Bend during recent floods.Noah Diffenbaugh, a climate scientist at Stanford University that studies the connection between climate change and weather events, said there is evidence that climate change is contributing to more severe storms and rain events in the Midwest as warmer temperatures create more water vapor in the atmosphere.But scientists are still cautious about connecting any specific weather event to changes in the climate, and typically only make that determination after the fact.”We don’t want to attribute something to global warming unless we’re highly confident,” he told ABC News, adding, “That’s because we’re looking at events that are more extreme. They’re record-breaking. They’re more extreme than we have historical experience for, so chance does play a role.”Diffenbaugh said it’s important to acknowledge how climate change is influencing weather patterns so the country’s infrastructure can prepare for potentially more frequent or more damaging storms, but that it’s also important to stick to the evidence of what we know.”I would be comfortable standing here or there saying that we already know that events have been increasing historically in this part of the world and that objective rigorous analysis shows that global warming has increased the odds of extreme precipitation events in this region of the world and, in particular, of record-breaking precipitation events in this region of the world,” he told ABC.”And in order to understand the conditions that came together, that will require specific analysis, but this is consistent with what has been occurring historically.”While Diffenbaugh and other researchers say they are highly confident in the connection between climate change and the risk from severe storms in the central U.S., the strength of the connection to other kinds of events such as hurricanes, tornadoes and wildfires varies.Multiple Democrats have referenced the recent tornado outbreak in the context of climate change, for example, but while research shows a connection to more intense storms, it’s more difficult to find a direct connection to tornadoes.Sens. Warren and Bernie Sanders have mentioned a connection, and Rep. Alexandria Ocasio-Cortez, who isn’t running for president but has been one of the most vocal Democrats about climate change, posted comments on her Instagram story connecting a recent tornado watch in Washington, D.C., to climate change. Ocasio-Cortez later posted an article and amended her statements to say that climate change does not cause tornadoes.”Tornadoes are one of the few weather categories not proven to be impacted in some way by climate change. Heat waves, drought and floods have a confident link. Snowstorms and hurricanes have loosely supported theories. But currently, there is no scientific evidence that climate change has an impact on severe thunderstorm and tornado frequency or intensity. Calendar and geography perhaps, but questions remain for supercell strength,” ABC News’ Senior Meteorologist Rob Marciano said.But Fisher said it shouldn’t necessarily be up to politicians to capture all the nuances of the science in a campaign, and that even if Democrats don’t capture all the details in statements connecting weather and climate, they still seem to generally follow the science.”That’s not what the president does, but that’s what these people are supposed to be doing, and as far as I’ve seen, the Democrats are trying to make that connection. And it seems like the American public is open to that.”Copyright © 2019, ABC Radio. All rights reserved.

In scathing draft of letter never made public, Trump chided James Comey for ‘erratic,’ ‘self-indulgent’ conduct
‘Godzilla vs. King Kong’ stomps forward in WB’s 2021 release schedule
How to build an emergency fund, how much to save for it and how to avoid spending it
Jeff Zients, Biden’s COVID czar, inherits hardest job in administration
Coronavirus live updates: US reports under 200,000 new cases for first time in two weeks
Impeachment needed to bar Trump from running for federal office: Rep. Joaquin Castro