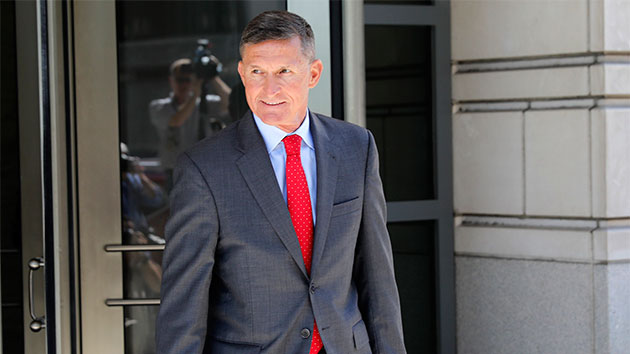 (WASHINGTON) — The special counsel’s office on Friday released the full transcript of a voicemail one of President Donald Trump’s lawyers left for Michael Flynn’s lawyer asking for a “heads up” about the former national security adviser’s cooperation with investigators, a call government prosecutors have described as a “potential” effort to hinder Robert Mueller’s probe.

The transcript, now disclosed in its entirety, starts out, “Hey, Rob, uhm, this is John again,” and shows how Trump’s attorney John Dowd reached out to Flynn’s attorney Rob Kelner to request “some kind of heads up” about the nature of the former security adviser’s cooperation with investigators.

“If, on the other hand, we have, there’s information that. .. implicates the President, then we’ve got a national security issue, or maybe a national security issue, I don’t know … some issue, we got to-we got to deal with, not only for the President, but for the country,” Dowd tells Kelner in the voicemail. “So … uh … you know, then-then, you know, we need some kind of heads up. Um, just for the sake of … protecting all our interests, if we can, without you having to give up any … confidential information.”

Prosecutors noted in Friday’s new court filing accompanying the transcript that portions of the transcript were included in the special counsel Robert Mueller’s report released last month. The full transcript is consistent with the overall narrative of the incident described in the report.

The call from Dowd to Kelner, dated Nov. 22, 2017, came on the same day when an NBC News report indicated that Flynn’s former business partner Bijan Kian was under FBI investigation for lobbying activities on behalf of Turkey, a sign the government was encircling Flynn and exerting pressure on him to cooperate with Mueller.

Kian last year pleaded not guilty to charges of acting as an illegal agent for a foreign government related to his Turkish lobbying operation with Flynn and is awaiting trial in July.

It’s unclear what prompted Dowd to call Kelner, but the voicemail suggests that the president’s lawyer was fishing for information on whether Flynn was cooperating with the special counsel investigators in the Russia probe.

In court documents filed earlier this month, government prosecutors described the contact from Trump’s attorney, as one of many “potential” efforts by those close to the president to thwart the investigation — an effort exposed because of Flynn’s 18 month-long cooperation with the special counsel’s team.

Releasing transcripts of collected phone surveillance approved by the Foreign Intelligence Surveillance Court such as Flynn’s phone calls with Kislyak, is unheard of, according to Seamus Hughes, an expert on national security court cases at George Washington University.

The court had also ordered the government to release an unredacted version of parts of the Mueller report related to Flynn’s case, but the government responded that only limited remaining redactions were in the report, such as sourcing of information, such as references to grand jury subpoenas.

Key moments from the inauguration of Joe Biden as 46th US president
Trump issues last-minute pardon to ex-husband of Fox News’ Jeanine Pirro
Sarah Michelle Gellar wishes her ‘Buffy the Vampire Slayer’ character a happy 40th
“The ‘Bridgerton’ Effect”: Searches for “embroidery,” “corsets” and other finery skyrocket amid Netflix show’s success
“This isn’t going to be quiet”: Daniel Kaluuya recalls when ‘Black Panther’ went from being a movie to a “moment”
Jeremy Renner reveals how he’s training for his upcoming Disney+ series ‘Hawkeye’