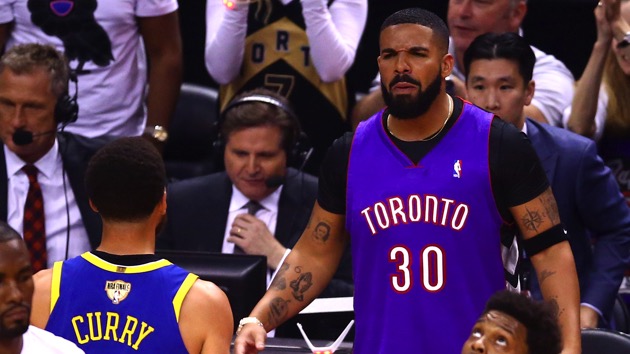 Vaughn Ridley/Getty Images
Posted on May 31, 2019 by ABC News

(TORONTO) — Drake made his presence known at last night’s Toronto Raptors game versus the Golden State Warriors in game one of the NBA finals.The rapper made “Headlines” as he rocked a vintage Dell Curry Toronto Raptors jersey courtside in an effort to “troll” Warriors star and Dell’s son Stephen Curry. Dell Curry played for the Toronto Raptors from 1999 to 2002 and retired with the team. To take trolling from “0 to 100,” the jersey was even signed by Dell Curry himself.

The moment Dell Curry realized @Drake was wearing his jersey (via @TheUndefeated) pic.twitter.com/OdptpAETXg

That wasn’t the only part of Drake’s wardrobe that had Twitter talking. The rapper had a strategically placed armband on his left arm throughout the game and it wasn’t because he was sweating. Drake has two tattoos of Warriors stars’ Steph Curry and Kevin Durant’s numbers above the inside of his right elbow. Friends turned foes for this series, he covered the tattoos with a Nike armband.

Drake appeared to cover up his Steph Curry and Kevin Durant tattoos for Game 1 of the #NBAFinals pic.twitter.com/T3SLyAaNS0

From friends to foes. pic.twitter.com/IyPXbmJTgr

Drake has drawn some heat for his “Worst Behavior” sideline antics, including massaging Raptor’s head coach Nick Nurse’s shoulders during the Raptors series against the Milwaukee Bucks during the eastern conference finals. This didn’t seem to faze the star during game one, who had plenty of interactions with Golden State players from his courtside seat.Warriors center Andre Iguodala almost took out Drake as he dove for a ball in the second quarter. The rapper had to “Jumpman” out of the way in the nick of time to avoid the collision.

Stephen Curry also has his fair share of interactions with Drake. The rapper posted a video to his Instagram with a video of him pulling lint out of Curry’s hair while the two chatted on the court. The caption joked that he would sell the lint on eBay while taking a dig at Warriors forward Draymond Green.Green and Drake had a heated sideline exchange after Thursday night’s game, where Drake appeared to yell “you’re trash” to the Warriors forward as he was pushed away by his teammate Curry. Green continued to yell at the rapper as he walked toward the tunnel to head into the locker room.

Drake had some words for Draymond after the Raptors' Game 1 #NBAFinals win 👀 pic.twitter.com/d0NCKKFFHE

Draymond is not worried about Drake. pic.twitter.com/1qP1nujjb7

John David Washington talks following in the footsteps of his Oscar-winning dad, Denzel Washington
Watch now: Action and joke-packed trailer for Disney’s animated ‘Raya and the Last Dragon’
Biden says he will replace the entire federal fleet with electric vehicles
What to know about the link between mental health and heart disease
Jane Fonda to receive Cecil B. DeMille Award at this year’s Golden Globes
DOJ nominee Kristen Clarke wants to make the promise of ‘justice for all’ a reality