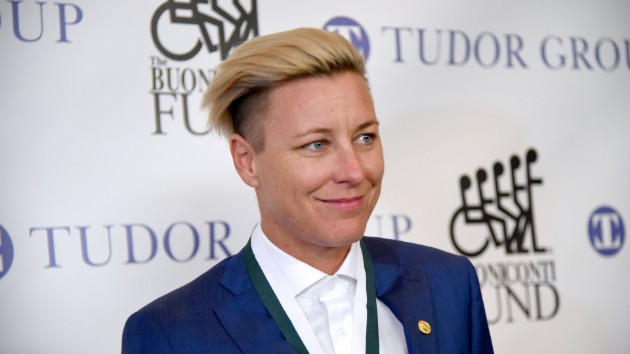 Mike Coppola/Getty Images for The Buoniconti Fund to Cure Paralysis
Posted on May 31, 2019 by ABC News

(NEW YORK) — Abby Wambach is the epitome of “girl power” goals. Not only is she a two-time Olympic gold medalist and a FIFA Women’s World Cup champion, but she’s also a New York Times best-selling author and an LGBT activist for equality and inclusion.Upon meeting Wambach, she looks like an athletic superstar looming over others at 5 feet, 11 inches, and with a presence and personality that are larger than life. You immediately want to be in her “Wolfpack,” which happens to be the title of her new book.”This is a book that’s not just for women, this is a book that’s also for men,” said Wambach. “I want women to feel empowered by this and I also want men to be educated by this. Women for all of time have been having to find themselves inside the works of men and I think it’s high time for men to step into learning about women.”Before Wambach could empower others, however, she had to empower herself.”People out there think that I must be the most confident human being on the planet, but for me that wasn’t always true,” she said. “Because I reached such highs as a soccer player, that brought up big fears for me as a person.”The world champ sat down with ABC News’ Good Morning America to tell us how she scored the confidence she sports today.1. Don’t let society constrain you.Wambach began her quest for breaking down boundaries well before she was a teenager. One of her first ventures out onto the soccer field was during her childhood when she played on a boy’s team.”This was just that period of time, that sweet spot where it was just about how good you were and that’s all that mattered,” Wambach told GMA.Wambach explained that it was when she was heading into puberty that she began feeling the divide between herself and the boys she once called her teammates.”The message…little boys and little girls are given about how they need to act to be approved in our culture is all B.S. if you ask me,” she said.The soccer star is out to redefine what it means to be a leader, especially for women.”Be completely empowered by who you are and what you want out of your life, not what the culture is telling you to be,” said Wambach.

2. Pave your own way.Before Wambach was one of the world’s greatest soccer players, she was the world’s cutest baby.”I do believe that I am one of the cutest babies that has ever been born,” said Wambach.Wambach said she was fearless as a child.”My family had what was called the ‘Abby alert,"” she said. “I would just venture off and do whatever I wanted to do.”A mentality Wambach has continued to embrace: “I’ve always just been venturing off on my own path and paving my own way.”

3. Sometimes you need luck to succeed.“This World Cup marked the end of my champion career for the Women’s national team,” said Wambach.While most might wonder if Wambach felt sad or bittersweet in this moment, she said what came over her was a resounding sense of relief.”You have expectations and goals for yourself, and for your team, and so often they’re not met,” explained Wambach. “This moment, I was just so relieved that I wasn’t going to be pissed off for the next 40 years of my life.”In a lot of ways, this wasn’t just a win for Wambach, it was the win as she closed out her career on the field.”Both teams deserve to be there and when you’re playing in a world champion environment, sometimes luck is the thing that allows your team to rise to the top,” she said.

4. Accept the love you deserve.Wambach was awestruck looking at a photo from her wedding to author Glennon Doyle.”When I met Glennon, I stepped into myself for the first time,” said Wambach.Like most brides, Wambach said she was full of nerves on her her wedding day. But her fears weren’t about the flowers, the caterer or the toasts — they were about accepting the love and life she deserved.”I wanted it to be so perfect,” she said. “I had to accept the best, most beautiful, truest life that I could envision as being my actual life.”

5. Don’t live your life out of fear.Along with being an author, Olympic gold medalist and FIFA World Cup champion, Wambach is a mother to her wife’s three children.”It’s such a beautiful journey to have these kids and to know that who they become has something to do with you,” she said.Wambach said her own wolfpack is constantly sending her on a path of self-discovery. Her cubs make her want to live life to the fullest, she said.”The way that I want to live my life is not out of fear. I want to live it out of joy and love and respect and that kind of encapsulates this entire picture for me,” she said.