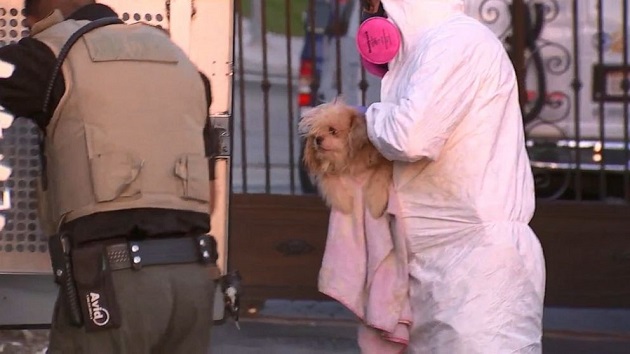 (LOS ANGELES) — Authorities removed 136 dogs from a house in a gated community in Southern California on Thursday. The owners of the mansion have been cited for animal cruelty.The Orange Police Department received an anonymous tip about animal cruelty at the home, according to Sgt. Phil McMullen, the department’s public information officer.Police arrived at the home at about 2:30 p.m. local time and were let inside the home by the owners.Orange police said they found “approximately 100 animals, ranging anywhere from puppies to elder dogs in various stages of medical issues.”Orange County Animal Care was called and they began removing the animals from the home wearing hazmat suits and masks.”Based on what was found inside of the home, it was deemed to be uninhabitable and the city of Orange Code Enforcement [team] red-tagged the residence,” McMullen said. “Also based on the condition of the animals, the poor health that some of them were in, different stages, the two occupants of the home were issued citations, misdemeanors for animal cruelty.”Orange police said the investigation was still ongoing and charges could still be upgraded in the case.The city is located just southeast of Anaheim and about 35 miles from downtown Los Angeles.The dogs are being treated by Orange County Animal Care and will eventually be put up for adoption. OC Animal Care had advertised they were already at 112 percent capacity earlier this week. Copyright © 2019, ABC Radio. All rights reserved.