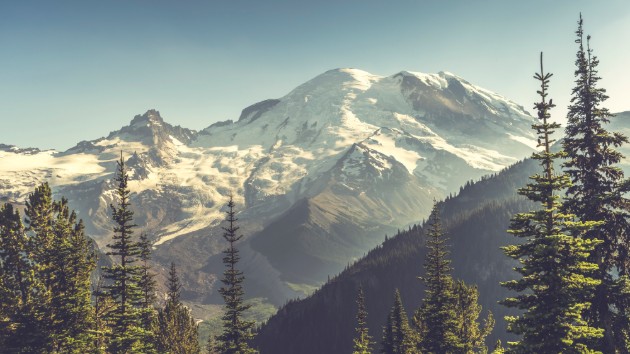 (SEATTLE) — One person was killed and two others injured after several groups of climbers were caught in a rockfall on Mount Rainier in Washington on Wednesday.There were three pairs of climbers camping out at 10,400 feet while making their way up the mountain when a large group of rocks broke free from the mountain and “swept through the site,” according to a statement from Mount Rainier National Park. Two tents were crushed, while a third was unharmed by the slide.One of the climbers made a 911 call at about 8 p.m. local time from the Liberty Ridge route and reported the incident, authorities said. On Thursday morning, park rangers were able to transport the most seriously injured climber to Harborview Medical Center in Seattle, the park said in a statement. The other injured climber and the body of the dead climber were flown off the mountain Thursday afternoon at about 2:30 p.m., authorities said.The three uninjured climbers were also taken off the mountain by helicopter.”It’s a mountain that has a lot of rock fall, a lot of ice fall on it, and so everyone said, ‘Well we do have fatalities on the mountain,"” Mount Rainier National Park spokesman Kevin Bacher told ABC News. “Many years we go by with no fatalities and then they’ll have a bad year and get a spell of them.”The patient at Harborview Medical Center, a 37-year-old man, is in serious condition, the hospital reported to ABC News.Rescue teams were not able to reach the climbers until weather and rock conditions were favorable for the helicopter, Bacher said.Bacher said about 5,000 people reach the summit of the mountain each year.”We do have incidents occasionally,” he said. “This is a challenging mountain to climb.”Mount Rainier, located in Washington state’s Cascade Mountains about 60 miles southeast of Seattle, is 14,411 feet high. It is 17th-tallest mountain in the United States, but the fifth tallest in the continental U.S.The top-10 highest peaks are all in Alaska.Bacher said the Liberty Ridge route is particularly challenging and also “a very exposed area.””It’s a place that is on a narrow ridge that goes up the north side of the mountain — very, very steep, very technical in terms of climbing ability, which is why very few people climb the mountain by this route,” Bacher said. “But [it’s] also why it is so popular among the climbers who have the skills necessary to tackle the challenge. It’s a uniquely beautiful and uniquely challenging and extraordinary route up to the summit of Mount Rainier, but it also brings with it unique challenges.”May 31 is the fifth anniversary of the death of six climbers on Mount Rainier, one of the worst single accidents in the mountain’s history. The group of climbers died when they fell more than 3,000 feet, also from the Liberty Ridge route. Copyright © 2019, ABC Radio. All rights reserved.

Larry King remembered by celebrities, politicians: ‘A newsman who interviewed the newsmakers’
Coronavirus live updates: Cases falling week-over-week in most states
States trying to ramp up vaccinations frustrated by shortages
As nursing homes get vaccine, assisted living centers are left ‘falling through the cracks,’ experts say
Georgia Black women leaders on ‘saving democracy’ by helping flip Senate, fueling Biden-Harris win
‘The Boys’ is tackling one of the comic’s raunchiest storylines