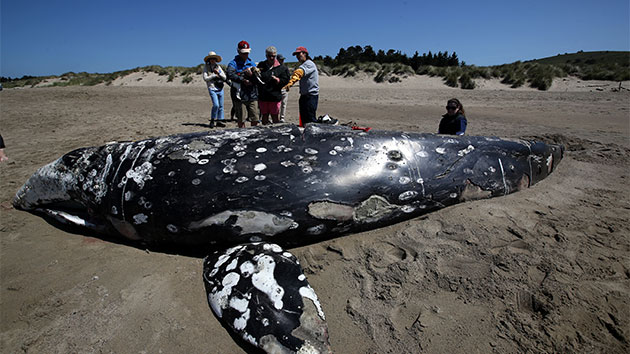 Justin Sullivan/Getty Images
Posted on May 31, 2019 by ABC News

(SAN FRANCISCO) — The stranding of 70 gray whales along the United States’ west coast is considered to be an “unusual mortality event” by the the National Oceanic and Atmospheric Administration (NOAA) Fisheries.

Thirty-seven gray whales have washed up in California, including more than a dozen in the San Francisco Bay Area, experts said during a NOAA conference call on Friday afternoon. The whale species have also been beached in Oregon, Washington and Alaska.

There are currently an estimated 27,000 gray whales that migrate in the eastern northern Pacific region, incliuding 1,600 calves, according to the NOAA, which cited a 2016 survey. This population estimate is considered to be “abundant” and “on par” with the estimates from 1987 to 1988, when there were 26,900, said Dave Weller, research wildlife biologist for the Southwest Fisheries Science Center in La Jolla, California.

Researchers are trying to figure out whether the elevated die-offs are occurring due to environmental factors, disease or human activities, such as ship strikes, said Deborah Fauquier, veterinary medical officer for NOAA Fisheries. Once they narrow it down, scientists will then determine a response plan.

Lately, the whale population has been “subpar and less energetic,” perhaps due to a poor feeding season in the arctic in the summer and fall of 2018, Weller said.

“The arctic is changing very, very quickly,” Moore said. “Whales are going to have to be able to adjust to that.”

While gray whales are “good at eating a variety of things,” their main diet consists of anthropods located in the ocean’s sediment, Moore said. Scientists are currently researching whether the sea ice, which is currently melting away in the arctic, serves as fertilizer for the anthropod sediment beds.

Without the anthropods, the gray whales will have to switch to krill or other sources of food, but they may not get the lipid-rich feed they need to survive, Moore said.

After the whales feed in the arctic, they typically move south to Mexico before making their way back north to the United States’ west coast, according to the experts. During this time in the migration pattern, scientists would expect the whales to be “under peak nutritional stress,” but the emaciated and malnourished state of many of the beached gray whales have made them concerned, Weller said.

In addition, cases of beached whales in remote areas like Alaska are much harder to find and quantify, Calambokidis said.

Scientists expect more whales to wash up dead, too. It’s still early in the season for places like Washington, Canada and Alaska, so the numbers are just partial totals so far and the “event is still very much ongoing,” Calambokidis said.

The population is capable of rebounding

The number of beach whales announced on Friday is the most since the last unusual mortality event (UME) was declared during the 1999 to 2000 season, experts said.

During that season, a large El Nino event could have contributed to the warming waters and less food for the whales, Moore said. However, those whales were not emaciated and were in good body condition overall, she added.

At the time, researchers were unable to determine if the deaths were caused by a mix of contributors or if it was one dominant factor, Moore said.

But based on the findings from the last UME, researchers are confident that the population can recover as long as the parameters are the same, such as the environment and the availability of food, Keller said.

How the public can help

Experts encourage the public to report any sick, stranded or dead whales they may come across.

However, Fauquier urged people not to approach the whales, because they can harm both themselves and the animal.

In addition, it is illegal to approach them, Fauquier said.

Biden team preparing for ‘any scenario that should arise’ on Inauguration Day
Kamala Harris set to resign from US Senate so she can preside over it
Rep. Lou Correa latest member of Congress to test positive for COVID-19 following siege on Capitol
Giuliani says he’s working on Trump’s impeachment defense, would argue voter fraud claims
Woman, 70, filmed allegedly poisoning husband’s coffee with roach killer multiple times
Snow squalls and gusty winds expected in parts of Midwest and Northeast