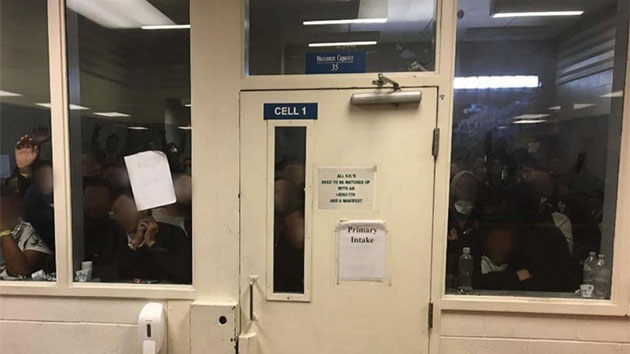 (EL PASO, TX) — In a report out Friday, the Homeland Security inspector general has found “dangerous overcrowding” and unsanitary conditions at a Customs and Border Protection facility in El Paso, Texas, where hundreds more migrants were being housed than the center was designed to hold.

“Border Patrol agents told us some of the detainees had been held in standing-room-only conditions for days or weeks,” the office of inspector general wrote.

The El Paso Del Norte Processing center housed as many as 900 migrant detainees earlier this month and, the report also found, the facility only has the capacity for 125. CNN first broke the news.

The findings come as border patrol continues to grapple with record levels of migrant families crossing the southern border with hundreds crossing between ports of entry each day. Agents on Thursday apprehended a group of more than 1,000 migrants who crossed illegally in El Paso.

While Immigration and Customs Enforcement is responsible for handling long-term detainees, Border Patrol officials interviewed by the inspector general said their requests for detention space get denied in some cases. There are 80,000 people in immigration custody, according to acting Homeland Secretary Kevin McAleenan.

The chairman of the House Homeland Security Committee, Democrat Bennie Thompson, responded to the report saying ICE struggles with capacity issues because they detain too many non-criminals and said authorities should have been prepared.

“U.S. Customs and Border Protection management has known for months to expect a higher-than-usual number of migrant families coming to our border to seek asylum – yet has done nothing to prioritize adequate, safe, and humane temporary holding facilities for those migrants, Thompson said in a statement.

“CBP was struggling to maintain hygienic conditions in the holding cells. With limited access to showers and clean clothing, detainees were wearing soiled clothing for days or weeks,” the report said.

The inspector general recommended CBP take “immediate steps” in response to the findings.

The agency detailed actions it plans to take to mitigate overcrowding, including releasing family units with orders to appear to complete the immigration process.

CBP plans to open another temporary holding facility in the El Paso area later this summer. A higher capacity central processing center is scheduled to be open in the next 18 months, according to CBP.