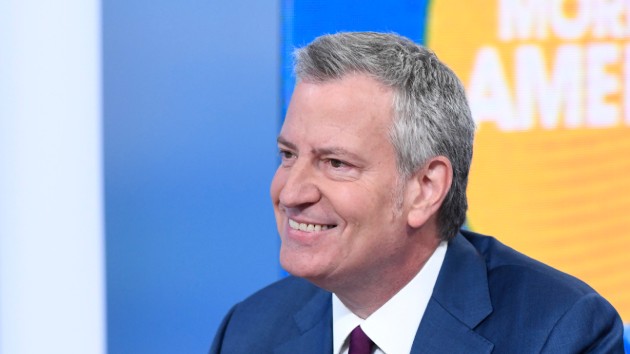 Walt Disney Television/Paula Lobo
Posted on May 31, 2019 by ABC News

(NEW YORK) — New York Mayor and Democratic presidential hopeful Bill de Blasio is joining the chorus of voices calling out and criticizing the primary’s current front-runner, former Vice President Joe Biden, over his continued defense of the 1994 crime bill.”We need a nominee in the Democratic Party that understands the crime bill was a mistake — and is ready to get away from the era of mass incarceration and go in an entirely different direction,” de Blasio told ABC News in an interview at Gracie Mansion. The Violent Crime Control and Law Enforcement Act, often dubbed “the 1994 crime bill,” was signed into law by President Bill Clinton and aimed to curb spiking crime rates around the country. Biden voted for it, and, as the Senate Judiciary Committee chairman at the time, played a significant role in passing it.Now, many Democratic 2020 candidates and even President Donald Trump are taking aim at the former vice president, pointing to the bill as a cause for the mass incarceration of young black men.”It clearly ultimately led to disparate treatment between white people and people of color right there. That’s not American. That’s not fair,” said de Blasio. “Anyone who voted for that bill has to own up to it and has to acknowledge that we need to go an entirely different direction.”Across the country, the incarceration rates in the years leading up to the passage of the 1994 crime bill had already begun to see a steep rise, beginning in the early 1980s, according to the Sentencing Project and data from the federal Bureau of Justice Statistics.When asked about that data, the mayor said, “The crime bill kept it going and made it worse.”De Blasio attributed a drop in crime rates since the 1990s to smarter policing that involved communities, not methods instituted by the crime bill.Provisions in the 1994 crime bill included paying for new federal prisons if states agreed to force offenders to serve 85 percent of their sentence as opposed to allowing them out early on parole; providing tens of billions of dollars to put 100,000 more police officers on the streets by paying for two-thirds of the new officers’ salaries in participating cities; instituting a federal “three strikes” rule, which mandated harsher sentences of up to life in prison for defendants who had committed a third felony after being convicted in state or federal court of two previous felonies, at least one of which was serious or violent; and funding crime prevention programs. Other notable components included an assault weapons ban, the removal of education grants for inmates and the Violence Against Women Act.The “three strikes” rule — implemented in varying degrees by states, with California being the harshest — was among the most controversial aspects of the law because it mandated lengthy prison terms for less serious crimes if the defendant was a repeat offender.The former Delaware senator has said that while he “had to accept” Clinton’s “three strikes” rule, mass incarceration was a result of “states setting mandatory sentences.”De Blasio’s criticism comes after a New York Times column claimed Biden should be proud of his support for the 1994 bill. The column called “disproportionate consequences for racial minorities” a side effect of the bill but said it made cities, like New York safer — an idea de Blasio rails against.Biden has defended his support of the bill on the 2020 campaign trail.”Folks, let’s get something straight,” Biden said at a Nashua, New Hampshire, campaign stop on May 14. “This idea that the crime bill generated mass incarceration, it did not generate mass incarceration.”De Blasio wants to take his case to voters but hasn’t met the Democratic National Convention’s qualifications to claim a spot on the debate stages.”I’ve got a lot to say … about what has been achieved here in the biggest, toughest city in the country and all the things that we could do to address the needs of working people,” de Blasio said. “My concern is, we’d better not cut off real debate and real competition and undercut the diversity of the field of options that we have right now.”Copyright © 2019, ABC Radio. All rights reserved.

San Francisco passes CAREN Act to criminalize phony 911 calls based on race
Retailers stock up on smaller turkeys for Thanksgiving due to pandemic
Election 2020 live updates: Biden on offense in Georgia, Trump on defense in Midwest
What issues will win the Latino vote on Election Day?
Election 2020: Both Trump and Biden campaign in battleground Pennsylvania
Two misplaced guns found in Clearfield County in separate incidents