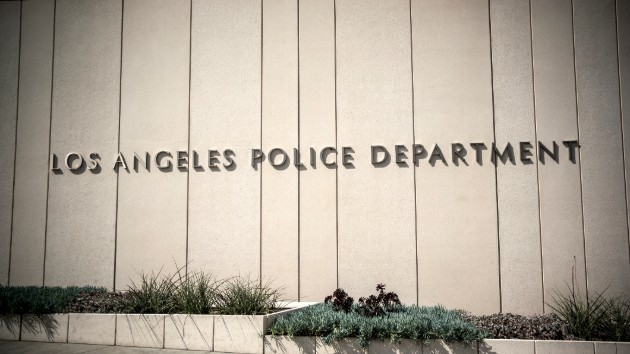 (LOS ANGELES) — At least one officer with the Los Angeles Police Department has contracted the bacteria that causes typhoid fever, Salmonella typhi, and another one is showing typhus-like symptoms, the police department announced on Thursday.The officer who had contracted the illness is being treated, and the other officer has yet to be confirmed to be infected, according to the LAPD. Both officers work at the LAPD’s Central Division, according to a statement released by the department. Salmonella typhi is uncommon in the U.S. and other modern industrialized nations, affecting only about 350 Americans each year — most of whom recently returned from overseas travel. Worldwide, it affects an estimated 22 million people each year, according to the Centers for Disease Control and Prevention (CDC).The police department is working with the city to “disinfect any work areas that may have been exposed,” a process that was expected to be completed Thursday evening, the LAPD said in a statement.Salmonella typhi is commonly spread through food or water that has been contaminated by someone shedding the bacteria. The bacteria can be spread by both people who are actively ill as well as so-called “carriers” of the bacteria but not showing symptoms — one in 20 go on to become carriers.It’s unclear what caused the officers’ illnesses.Los Angeles has been dealing with a growing rat infestation and typhus outbreaks since at least October 2018, according to ABC Los Angeles station KABC.Typhus is different from typhoid fever, which can come from a variety of sources. Murine typhus (Rickettsia typhi) is caused by bites from infected fleas, epidemic typhus (Rickettsia prowazekii) comes from infected body lice and scrub typhus (Orientia tsutsugamushi) comes from infected chiggers, or larval mites.“Unfortunately, our police officers often patrol in adverse environments and can be exposed to various dangerous elements,” the LAPD said in a statement on Thursday. “We have notified the Police Protective League as well as our employees working at Central Division, about the outbreak and we have further provided them with strategies to stay healthy while we mitigate this issue.”Typhoid fever and typhus are often diagnosed through blood tests and treated with antibiotics. Symptoms associated with the two infections include fever and chills, body and muscle aches, nausea and vomiting.The best way to prevent infection by Salmonella typhi is to wash your hands frequently, and for any form of typhus, to avoid contact with the animals that can pass on the infection. Copyright © 2019, ABC Radio. All rights reserved.