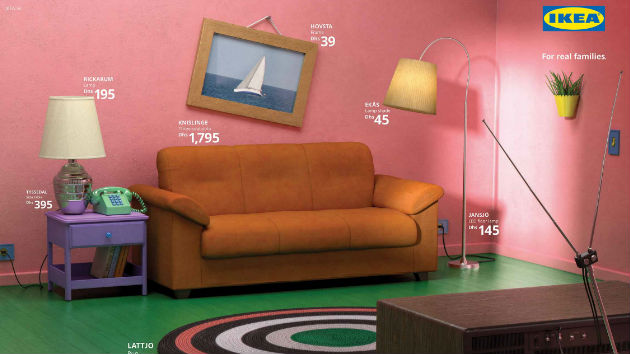 Specifically, the company’s “Real Life Series” replicated three famous living rooms — from The Simpsons, Monica’s apartment from Friends, and the Christmas light-festooned living room of Winona Ryder’s character from Stranger Things — and is offering all the furnishings you need to steal those looks.

This appears to be an unlicensed tribute, so, for example, there’s no mention of The Simpsons in what IKEA calls the “Room for Families.”  The word “friends” is similarly missing from the “Room for Mates.”  But one look at the rooms and their inspiration is obvious.

Likely for this legal reason, rooms and their furnishings aren’t replicas per se — for example, the Knislingh three-seat sofa isn’t offered in the same orange color of the one on which Homer, Marge and the rest of the family sit on The Simpsons — but the items chosen are arranged to appear pretty similar to those seen on the small screen, and the illusion is completed by paint and accessory offerings to help you match the rooms seen in the shows.

Vaccinating America is easier said than done: 5 things to know about Biden’s plan
‘The Boys’ is tackling one of the comic’s raunchiest storylines
Clare Crawley breaks her silence on split from Dale Moss: “This was not what I expected or hoped for”
Priyanka Chopra Jonas says the racism she suffered in high school forced her to leave America
Inaugural poet Amanda Gorman gets surprise message from Lin-Manuel Miranda
‘The Bachelor”s Sarah Trott explains her sudden exit from the show