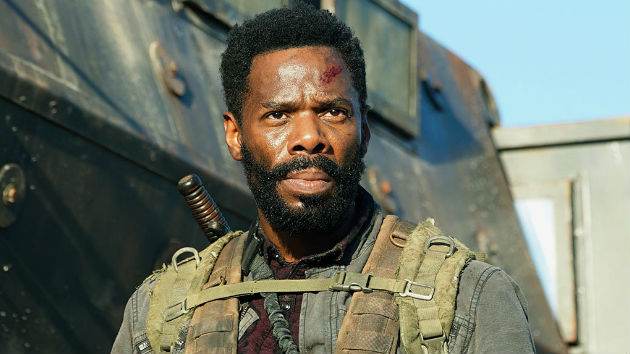 (NEW YORK) — Colman Domingo has been one of the few remaining original stars of AMC’s spin-off Fear The Walking Dead, and much of that is due to the mysterious charm of his character Victor Strand.

“He’s like peeling open a nice sweet and bitter onion,” Domingo laughs to ABC Radio while describing his smooth-talking alter-ego. “A little spicy, he’ll get in your eye at times.”

Fans recall we first met him behind bars as the walker outbreak began; he used his skills to slip his confinement, becoming the unlikely savior of a band of survivors.

“[P]eople always think, ‘Oh he’s such a selfish guy, he looks out for himself"” Domingo says. “But…I’ve always justified that you look…at what he’s actually done: He saved like eight people first on his boat…He’s always actually taking care of people but in a way that it’s a little tricky…[I]t’s on his own terms.”  Also returning for Fear the Walking Dead Season 5 are Walking Dead veteran Lennie James, along with Alycia Debnam-Carey, Danay Garcia, Garret Dillahunt, Maggie Grace, Jenna Elfman, Alexa Nisenson and Ruben Blades.

This time around, the group will find itself put to “the ultimate test.” According to AMC, “The group finds themselves in uncharted territory, one which will force them to face their fears and perhaps discover an entirely new way to live.”

Domingo agrees, noting how far the show has come.

“This season it really is gonna be epic because we’re doing things that I think that they have not done on the ‘mothership’,” he says. “We keep spinning into our own universe.”