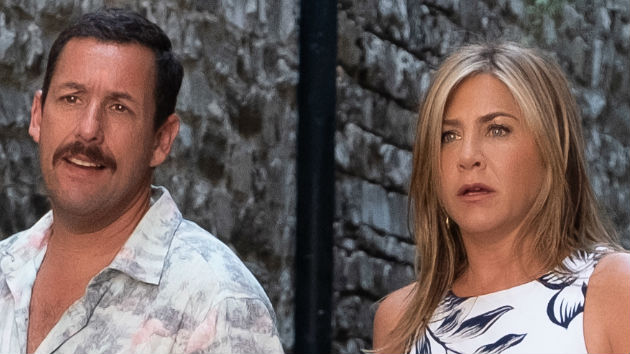 (LOS ANGELES) — Jimmy Kimmel returned to prime time for the 12th straight year, in conjunction with the NBA Finals between the Golden State Warriors and the Toronto Raptors, for Jimmy Kimmel Live: Game Night.

On Thursday night, before the big NBA Finals game one between the defending champion Warriors and the upstart Raptors, Jimmy welcomed Adam Sandler and Jennifer Aniston, who co-star in the upcoming Netflix comedy film, Murder Mystery, premiering June 14. During the interview, Aniston and Sandler revealed that they were, as Kimmel later put it, “friends before Friends.”

“We met at Jerry’s Deli,” recalled Aniston. “We were very young. One of my buddies and Jennifer were dating,” added Sandler, although Jen disagreed about the “dating” part. “It was fun, and then we had breakfast together.

After Kimmel congratulated Sandler on his daughter Sadie’s recent Bat Mitzvah, the funnyman told a story of how he asked Maroon 5 frontman Adam Levine to sing at the affair, and to Adam’s surprise, Levine said, “Yes.”

“I text[ed] him, ‘I’m sorry to do this to you, my kid’s getting Bat Mitzva’s Saturday night, would you mind coming and singing a few tunes?"” said Sandler. “And then he writes, ‘I can’t say no to you, where?"” I tell him where, he goes, ‘Oh, I used to go there growing up, I went to a bunch of Bar Mitzvahs when I was a kid there, what songs do you want?"”

Added Sandler, “I was like, ‘Oh, God, this is really happening.”