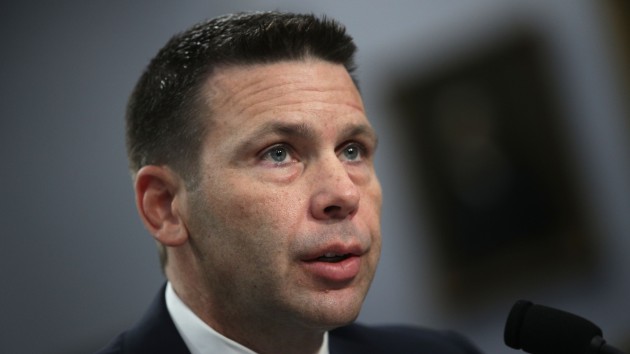 (WASHINGTON) — Acting Homeland Secretary Kevin McAleenan said he has no problem standing up to President Donald Trump when it comes to making recommendations on the border crisis, insisting in an interview this week with ABC News that “if you make a good case and get your facts in order, he’ll listen.”McAleenan took charge of the Homeland Security Department after Kirstjen Nielsen submitted her resignation last month and Trump promised supporters he’d take a tougher approach on stopping illegal immigration. While only in the role on a temporary basis, McAleenan was mostly a popular choice, even among some Democrats, because of his reputation as more of a pragmatic law enforcement official than an anti-immigration hardliner. McAleenan has since drawn on this public persona to make his case to Congress to help address the border crisis through legislation, even when appearing inherently at odds with the president on such matters as supporting foreign aid and family separations.When asked by ABC News’ Matt Gutman whether he’s ever stood up to the president, McAleenan said “of course,” adding that Trump expects his cabinet to provide honest assessments.”I’m a person of integrity,” McAleenan said in an interview from Guatemala on Wednesday. “I’ve been a career law enforcement officer. I think [Trump] expects no less than the best facts and the best recommendations I can make to him, and I’ll continue to do that.”But while McAleenan was in Guatemala, his mission there seemed to run counter to Trump’s “America First” approach. Whereas McAleenan was working with the government in Guatemala to try to crack down on smuggling networks and hearing from non-governmental organizations on the importance of foreign aid, Trump has largely panned diplomatic outreach and foreign aid.This spring, the State Department announced Trump wanted to cut all direct assistance to Guatemala, as well as El Salvador and Honduras — the three countries that represent the vast majority of asylum seekers at the U.S. border. Officials have since said future funds are frozen, but existing contracts are still being paid.Trump announced late Thursday, with McAleenan’s support, that he was planning to levy tariffs against Mexico unless it stopped Central Americans traveling through its borders.Trump has taken other major steps to try to curb illegal immigration only to be swiftly blocked by the courts. The Justice Department announced this week it would appeal a federal judge’s ruling that blocked Trump from bypassing Congress to pay for border wall construction by pulling $1 billion from military accounts, including pay and pension funds.Migrant families are arriving in record numbers this year, with officials expecting to handle some one million people at the southern border this year — double the number from last year. The reasons are complex, ranging from poverty to threats from gangs to weather-related disasters that have wiped out farmland.The Trump administration also blames court-ordered limits on the ability to detain children past 20 days, insisting that has only encouraged travelers to bring children with them because of the promise of a quick release, allowing them to live and work while waiting for an overwhelmed immigration court system to take up their case.Critics have countered that the president has done little to address the humanitarian crisis in Central America and that his threats to close the border and build a wall may have even encouraged the latest rush of asylum seekers. Copyright © 2019, ABC Radio. All rights reserved.