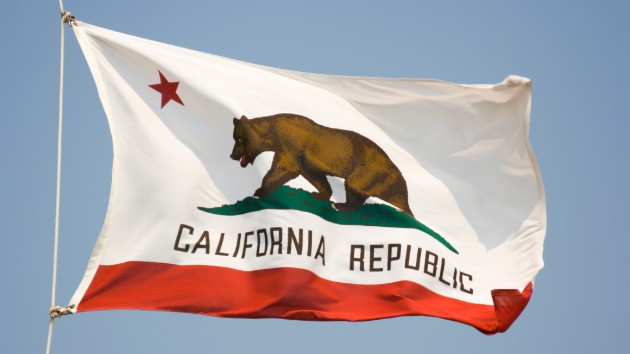 (SAN FRANCISCO) — When 14 Democratic presidential candidates descend on California this weekend, they’ll mine for gold in a left-leaning state with a large share of delegates and, ultimately, electoral votes that could help hand a candidate an Oval Office jackpot.Top-tier candidates, including Sens. Bernie Sanders, Elizabeth Warren and Kamala Harris and South Bend, Indiana, Mayor Pete Buttigieg are speaking at California’s Democratic Convention in San Francisco, hoping to nab some of the 416 delegates up for grabs when California voters go to the ballot box on Super Tuesday next year. The new March 3 date is months earlier than recent presidential elections. And mail-in-voting for the state starts a month before: the same day as the Iowa Caucus.”You can come in third [in California] and leave with more delegates than you had if you won New Hampshire or Iowa,” said Roger Salazar, a spokesperson for the California Democratic Party.Also in San Francisco, starting Friday and through the weekend, with several candidates in attendance is MoveOn’s “Big Ideas Forum,” an event aimed at progressives. And a number of the Democratic hopefuls also plan to attend the Unity and Freedom Presidential Forum on immigration in Pasadena on Friday in an appeal to Latino voters — a group that, as of the 2020 cycle, will become the largest minority voting bloc.California Insurance Commissioner Ricardo Lara said the parade of candidates currently coming through the state is exactly what he intended when he wrote the bill as a state senator to move California’s primary voting up in 2020.”You’re having candidates engage Californians in a much more comprehensive way. It forces that conversation, and even as candidates campaign across the country, they can point out that California has a different perspective,” said Lara, who has thrown his support behind Harris, the state’s junior senator.But he said he doesn’t think the bill necessarily even gives the California native an advantage.”As a Kamala supporter,” he said, “there’s no way we’re taking anything for granted. That doesn’t mean we’re not going to do the work. We’re going to talk to voters and grind it out.”He said he expects some of those conversations with voters this weekend will revolve around women’s rights as anti-abortion laws sweep through the country. In March, California Attorney General Xavier Bacerra filed a lawsuit against the Trump administration’s rule on Title X which, in part, would prohibit doctors from making abortion referrals.Lara also said that with roughly one-sixth of California households being mixed-status households, he expects many candidates to address immigration.”We’ve proven we can incorporate our immigrants and the sky doesn’t fall,” he added.In April, Trump tweeted that “Those Illegal Immigrants who can no longer be legally held (Congress must fix the laws and loopholes) will be, subject to Homeland Security, given to Sanctuary Cities and States!”He later specifically targeted California, saying “California certainly is always saying, ‘oh we want more people’ … well we’ll give them more people.”Los Angeles Mayor Eric Garcetti tweeted immigrants “are people, not pawns.”Salazar pointed to another area where many Californians disagree with some of the actions the White House is taking: climate change.”When it comes to the environment, the governor and the attorney general and other state leaders have been very active on pushing back on the White House to minimize the impacts,” he said.Earlier this year, the White House and California once again clashed on environmental policy in talks that ended without an agreement on a controversial Trump administration proposal to roll back fuel efficiency standards for cars and trucks meant to reduce greenhouse gas emissions.Last month, California Gov. Gavin Newsom filed a suit against the Trump administration to release data supporting their decision to rollback federal vehicle emission standards.While some speculate getting California voters in the process earlier will change how the candidates approach policy, others believe a nominee could be decided sooner since delegates will be decided earlier on, leaving the democratic nominee with more time to challenge Trump.Lara cautions it’s too early to speculate how California’s new role will affect the election, however, saying, “There are all these different theories on how moving the presidential primary is going to work out. And that’s to be seen.”Copyright © 2019, ABC Radio. All rights reserved.