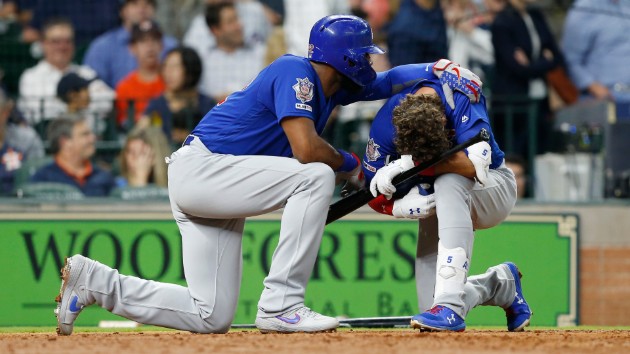 (HOUSTON) — A child was struck by a line drive at the Chicago Cubs vs. Houston Astros game at Minute Maid Park on Wednesday night, bringing the Cubs player who hit the foul ball to tears.Cubs center fielder Albert Almora Jr. was visibly distraught after he hit the foul ball in the fourth inning, falling to his knees at home plate in anguish. He was comforted by teammate Jason Heyward and manager Joe Maddon.The young girl who was apparently struck was taken up to the concourse by an adult male. She was seen crying, but conscious and alert.”A young fan that was struck by a foul ball during tonight’s game was taken to the hospital,” the Astros said in a statement. “We are not able to disclose any further details at this time. The Astros send our thoughts and prayers to the entire family.”Following the inning, Almora spoke to a security guard in the area of the foul ball and again appeared overcome by emotion. He covered his face with his hat and appeared to be wiping away tears after walking back to the dugout.David LeVasseur, who said he was sitting next to the child who was struck and picked up the foul ball, told the Houston Chronicle he walked up to the concourse and tried to give the family the ball.”I [came] upstairs and see the first-aid guys up there and the dad is holding the girl,” LeVasseur told the Chronicle. “She [was] alert, she’s conscious, she’s fine.”Almora was still visibly shaken up talking to the media in the locker room following the game.”Yeah, I don’t know. All my teammates, Joe, everybody came out and tried to talk to me and obviously I didn’t want that to happen, I didn’t intend for that to happen,” Almora said. “Credit to [opposing pitcher Wade] Miley as well. He calmed me down. The rest was kind of a blur.””I finally came to my senses the next half inning, after I went to the stands. … When that half inning was over, I just couldn’t keep it in anymore,” he added.Minute Maid Park’s netting, which was extended in 2017, reaches from the end of one dugout to the other, however, the child was sitting farther down the left-field line. Multiple high-profile foul balls hitting fans at Yankee Stadium in 2017, including one that injured a young fan coming off the bat of outfielder Aaron Judge, pushed MLB to request ballparks extend the netting.A 79-year-old woman was killed when she was struck by a foul ball at Dodgers Stadium in August 2018.Every team extended their netting at least to the end of the dugouts prior to the 2018 season.

‘Babylon 5’, ‘Lost’ actress Mira Furlan dead at 65
Baseball legend Hank Aaron dies at 86
‘Game of Thrones’ prequel, ‘Tales of Dunk and Egg’, in the works at HBO
How working from home due to COVID could be a double tax hit for some
Georgia Black women leaders on ‘saving democracy’ by helping flip Senate, fueling Biden-Harris win
Psst: Shonda Rhimes’ ‘Bridgerton’ renewed for second season at Netflix