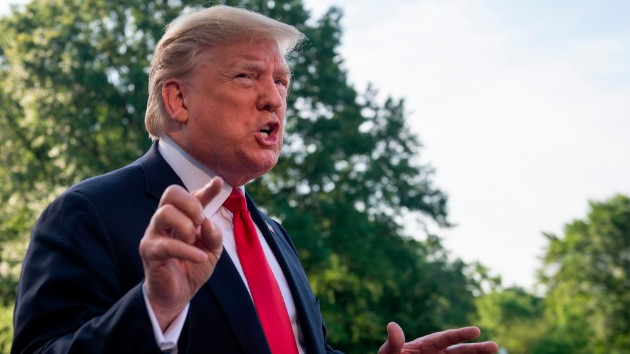 (WASHINGTON) — President Donald Trump responded harshly to special counsel Robert Mueller for the first time on camera Thursday morning saying, “Robert Mueller should have never been chosen” and calling him ‘a true never Trumper.” The president spoke to reporters as he left for a trip to Colorado a day after Muller broke more than two years of silence about his investigation into Russian interference in the 2016 election and whether Trump obstructed justice, saying he did not have the “option” of charging the president with a crime but that “if we had confidence that the president clearly did not commit a crime we would have said so.” “The whole thing is a scam. It’s a giant presidential harassment,” Trump said.

“Russia did not help me get elected. You know who got me elected? I got me elected. Russia didn’t help me at all,” Trump said, adding that, if anything, Russia helped “the other side” get elected. “I think it was the same as the report,” Trump said when asked for his reaction to Mueller’s statement. “There’s no obstruction. There’s no collusion. There’s no nothing. It’s nothing but a witch hunt.””There was no high crime. There was no misdemeanor,” the president said, when asked about impeachment. “I don’t see how… I can’t imagine the courts allowing it,” Trump said. “To me, it’s a dirty word, the word ‘impeach.’ It’s a dirty, filthy, disgusting word.”