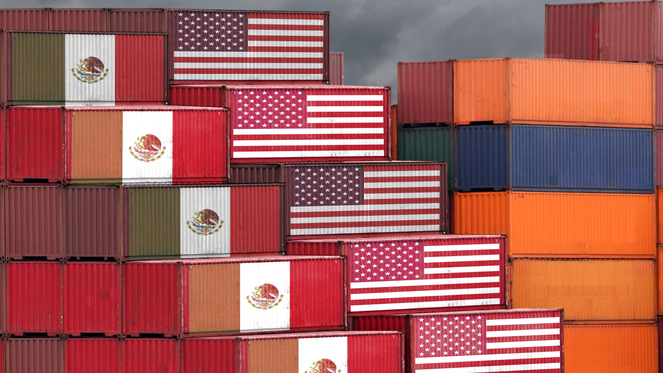 (WASHINGTON) — President Donald Trump on Thursday announced the U.S. would impose a 5% tariff on all goods coming in from Mexico this June, a punishment for what he says is the country’s willingness to let refugees transit its borders en route to the U.S. to claim asylum.The plan would call for increasing the tariffs further, going as high as 25% by October if Mexico didn’t curb migration.White House officials said they were confident that Mexico could resolve the problem of migration that Trump and U.S. lawmakers have been unable to address.”If that means taking the tariffs to 25%, that means taking the parents to 25%,” said acting White House chief of staff Mick Mulvaney. “We hope, sincerely hope it does not come to that.”The move risks serious gains in the U.S. economy, as many economists believe American consumers always end up paying the price of tariffs on imported goods. But Mulvaney said Americans were already paying the costs of illegal migration.”At any given moment, up to 100,00 migrants are transiting through Mexico on their way to the U.S. border,” McAleenan said.”The status quo is unacceptable and clear getting worse,” he added.Under the new plan, the initial tariffs on all goods would be imposed on June 10. But the rate would jump from 5% to 10% on July 1 and continue climbing by 5% each month unless Mexico takes action to “dramatically reduce or eliminate the number of illegal aliens crossing its territory into the United States,” according to a White House statement.Mulvaney said “it is our very firm belief that the Mexican government can and needs do more to help us with the situation on the southern border.”Earlier Thursday, on his way to Colorado for the U.S. Air Force Academy graduation, Trump vowed “very dramatic” action to address the refugee crisis at the U.S.-Mexico border. He said he’d make a “big league statement,” but provided few details.He said it would be his “biggest statement, so far, on the border.”