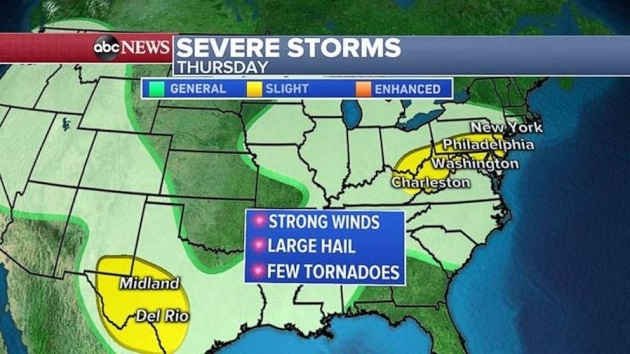 (NEW YORK) — After 398 reported tornadoes in the U.S. over the past 13 days, the threat will subside for most of the country in the days ahead.There were 24 reported tornadoes in four states — Iowa, Illinois, Texas and Oklahoma — on Tuesday and 270 damaging storm reports, largely from hail or gusty winds, in the past 24 hours. There is still a tornado threat in the Northeast on Wednesday for major cities such as Philadelphia, Baltimore and Washington, D.C. The threat for damaging winds and hail extends into West Virginia and Ohio and Kentucky.A few storms could also develop in western Texas, near Midland and Del Rio, where damaging winds and hail are possible.The Arkansas River crested at 23.41 feet near Tulsa, Oklahoma, making it the highest crest since 1986 and second-highest in the city’s history. It will continue to be in major flood stage for days to come.The river is also in major and record flood stages in Arkansas, and continues to rise in some areas. It will rise into major flood stage near Little Rock by this weekend and will stay in major flood stage into next week.Flood warnings cover the central U.S., due to the rising — or already flooded — rivers.There is a flash flood watch for the Northeast, including Philadelphia, on Thursday due to the heavy rain forecast.After Thursday, the severe weather pattern slows down and there is no rain forecast along the Arkansas River or much of the Missouri and Mississippi rivers.

Nearly a dozen ex-military members among those arrested in connection with Capitol riot
Horn helmet-wearing, painted face Capitol rioter should remain in custody: DOJ
Two US COVID variants have been identified. What does that mean for vaccines?
Self-described ‘QAnon shaman’ should remain in custody: DOJ
Flint water crisis: Many residents said they still don’t trust tap water
‘The Mandalorian’ becomes first streaming show to top Netflix numbers in streaming