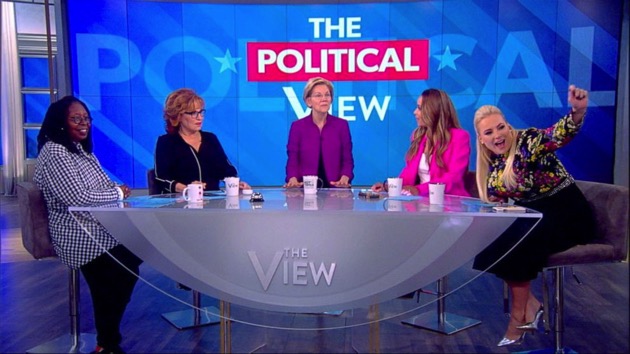 (NEW YORK) — On the heels of increased calls for impeachment across the 2020 Democratic presidential field after a rare briefing from special counsel Robert Mueller Wednesday, Sen. Elizabeth Warren furthered her own calls to see the president impeached on The View Thursday.”If he were anyone other than president of the United States, he would be in handcuffs and indicted,” Warren said.Warren was one of the first Democratic candidates to go so far as to call for President Donald Trump to be impeached after reading special counsel Robert Mueller’s redacted report when it was released in April.In the past month, Warren has also the Mueller report would’ve led to “any other human being” being “arrested and put in jail.” On Thursday, Mueller noted that “under longstanding department policy, a president cannot be charged with a federal crime while he is in office,” though U.S. Attorney General William Barr has said the policy did not interfere with Mueller’s conclusion.While Mueller’s statement Thursday pushed some 2020 Democratic hopefuls like Sens. Cory Booker of New Jersey and Kirsten Gillibrand of New York toward more impassioned calls for impeachment, others have hesitated to call for it outright, including former Vice President Joe Biden and Sen. Bernie Sanders, who have called the subject divisive and questioned the way it could benefit the Party.Though Warren stands in contrast to party leadership, including House Majority Leader Nancy Pelosi, by calling for impeachment, she has repeatedly denied that the calls are political.“It’s not politics. There are some issues that are bigger political convenience. And this is one of them,” she said.“You know, my view is make everybody vote. Make everybody in the House vote. Send it over to the Senate. Make them vote. If at the end of the day [Senate Majority Leader] Mitch McConnell is going to hold enough Republicans that there’s not an impeachment vote, you know, but put them on the record and make them live with those votes for the rest of their lives.”Asked if she believed Mueller might be convinced to testify before Congress or be drawn to speak out against insults from the president, Warren said she didn’t take Mueller for someone who would act on impulse.“I think Mueller’s got a slow pulse. He knows what he’s doing. I don’t think rage is how he rolls. I think Mueller is one of those people who says ‘read the footnotes’,” Warren said.Mueller appeared to be staying out of the politics, Warren said.“I genuinely believe for Mueller – and it sure is for me – this isn’t about politics. It’s about the Constitution. It’s not only about this president, it’s about what are the rules for the next president and the next president?”Warren’s calls for the president’s impeachment, despite her denials that politics play a role, also come as she announced her recent decision not to do a Fox News town hall because, in her words, the network, which airs many conservative shows, was a “hate-for-profit racket.”The View co-host Meghan McCain, a former Fox News contributor, said Warren’s decision alienated “really good people” who tune in. “For me, it just sounds like you don’t care about the people who watch Fox News,” McCain said.”I care,” Warren said, listing the town halls she’s held in trips across the country.”But a town hall is about their ability to get a bunch Democratic viewers to tune in, to watch as Democratic primary voters who want to see this, and to be able to be able to sell advertising space on the argument that advertisers can ignore the really horrible stuff that they continue to give a platform for,” Warren said. “I’ll keep reaching out but just not that way.”Warren, whose campaign has been driven by a dearth of policy announcements, also talked about her plans, many of which would be funded by a tax on the nation’s wealthiest. Just before her appearance on The View, her campaign debuted a new calculator to show how Warren’s universal child care program, which would guarantee free or nearly free programs to every child in the U.S., would affect families.Warren had two young children she was raising on her own when she took on her first full-time teaching job, she said. “God, it was hard,” she said.“I could do hard, but the thing that nearly killed me was child care. I went through one after another after another. The prices were crazy. Everything was horrible,” she said. As she was about to quit her job, she said, her aunt came to her rescue to assist with her kids.“She arrived with seven suitcases and a Pekingese dog named Buddy and she stayed for 16 years. That’s how I made it through. If all of America had an Aunt Bee we would be in a different place. But child care has gotten even harder,” she said.Because many of her plans rely on the richest people in America to fund them through a tax on ultra-millionaires, Warren is often criticized for being socialist, host Joy Behar pointed out.”Senator, you know what’s going to happen? You know what they’re going to say to all of these wonderful plans you have. They use “The S” word, socialism. How do you counteract that type of assault?” Behar asked.“You know, 43 million Americans who would see student loan debt cancelled under my plan, I think right there, that’s where you cancel it, you cancel it by making it real,” Warren said.“We’re not saying they’re bad people,” Warren said of the wealthy people who would be taxed to fund her proposals. “We’re just saying when you do that, pitch in 2 cents so everybody in this country gets a chance to build something.”Copyright © 2019, ABC Radio. All rights reserved.

DOJ has identified 400 suspects, charged 135 in Capitol riot
John David Washington talks following in the footsteps of his Oscar-winning dad, Denzel Washington
Watch now: Action and joke-packed trailer for Disney’s animated ‘Raya and the Last Dragon’
Biden administration plans to ‘speed up’ effort to put Harriet Tubman on $20 bill
Vanessa Bryant remembers Kobe and Gianna on one-year anniversary of their deaths
Biden says he will replace the entire federal fleet with electric vehicles