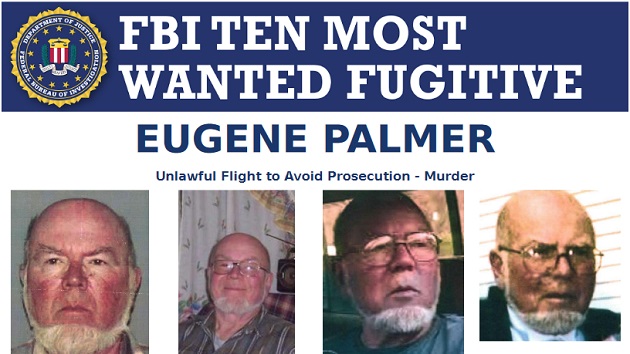 (NEW YORK) — Eugene Palmer liked to fish, hunt, trap and hike in the woods near Harriman State Park, north of New York City. That’s also close to where authorities allege he killed his daughter-in-law, Tammy Palmer, in September 2012.On Wednesday, the FBI added Eugene Palmer to its list of 10 Most Wanted Fugitives.“We can’t bring back Tammy Palmer, but we hope finding the man who is accused of murdering her will offer some solace to the grieving family,” said Bill Sweeney, assistant director-in-charge of the New York FBI office.Tammy Palmer, 39, a mother of two, was shot and killed outside her home in Stony Point, New York, according the FBI. Eugene Palmer left the scene of the shooting in a pickup truck, according to authorities. The truck was later found near Harriman State Park, the area through which Palmer is believed to have escaped.Palmer was charged with second degree murder in 2012, according to authorities.”After nearly seven years and thousands of hours of investigative work, we hope the addition of Eugene Palmer to the FBI’s Top Ten list will yield substantive tips to this fugitive’s whereabouts,” Rockland County District Attorney Kevin Gilleece said in a statement Wednesday.Some of Palmer’s relatives have said he probably died in the woods due to his diabetes, a heart condition and other ailments, but authorities have suspected the now-80-year-old managed to leave New York unnoticed.“When detectives and prosecutors realized Palmer most likely left New York State after the murder, they asked for our help and we filed a federal warrant,” Sweeney said. “That warrant allows our agents all over the United States and the world to investigate, and opens up a vast number of resources to find Eugene Palmer and bring him to justice.”Palmer is believed to be armed and dangerous. He is is 5’10” and has a deformed left thumb, according to authorities.The FBI is offering a reward of up to $100,000 for information leading to Palmer’s arrest.