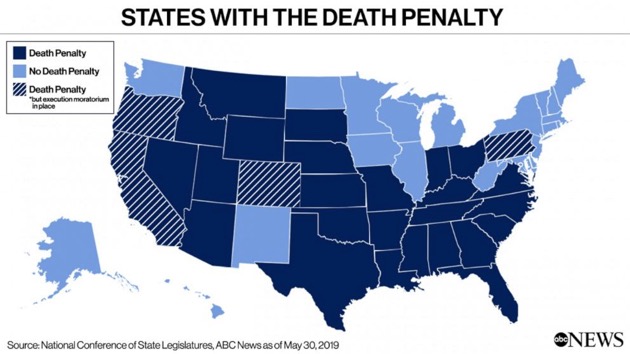 National Conference of State Legislatures, ABC news
Posted on May 30, 2019 by ABC News

(CONCORD, N.H.) — New Hampshire has become the latest state to abolish the death penalty.The move was not without controversy, however. The law passed after lawmakers in the state legislature overrode the governor’s veto.No one has been executed in New Hampshire since 1939.The bill, HB-455, was introduced in the New Hampshire House of Representatives in January.Gov. Chris Sununu, a Republican, vetoed the bill on May 3 after it passed both houses in the legislature.Sununu tweeted Thursday that he is “incredibly disappointed” by the veto, allowing the bill to become law.”I have consistently stood with law enforcement, families of crime victims, and advocates for justice in opposing a repeal of the death penalty because it is the right thing to do. I am incredibly disappointed that the Senate chose to override my veto,” Sununu tweeted.Some of the more recent actions against the death penalty in other states have come at the behest of the respective governors.In March, California Gov. Gavin Newsom issued an executive order halting all executions in the state. That move did not outlaw the death penalty but deemed that no one would be executed in the state during Newsom’s administration.Copyright © 2019, ABC Radio. All rights reserved.

Real-life ‘League of Their Own’ player raises money for 94th birthday to build women’s baseball center
Macaulay Culkin joins petition to edit Donald Trump out of ‘Home Alone 2’
FBI discusses possibility of explosive devices at expected protests linked to inauguration
DC police officers speak out after US Capitol siege: ‘I thought … I might die’
Taco Bell introduces new plant-based menu items, plus a special message about the return of potatoes
POLL: With partial blame for the Capitol attack, majority favors barring Trump from office