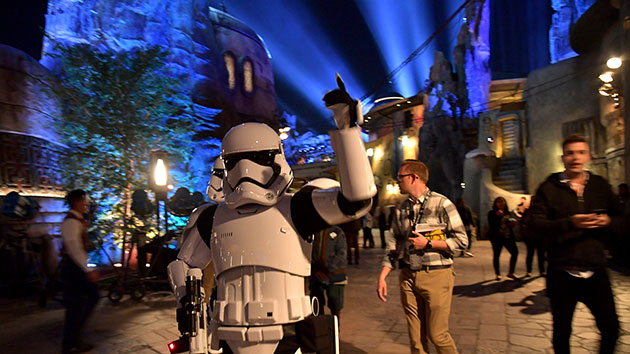 (ANAHEIM) — Star Wars: Galaxy’s Edge are new park attractions within Anaheim, California’s Disneyland and Orlando, Florida’s Walt Disney World Resort. Fans in California will get the first chance to visit that galaxy far, far away, which opens in Disneyland on Friday, but ABC News got a sneak peek.

The immersive, 14-acre destination is designed to make visitors feel as if they’re walking the streets of the fictional trading outpost planet of Batuu, alongside all the droids and aliens you’d expect in a Star Wars film.

Speaking of droids, at the Droid Depot, you can build one of your own. For $25,000, you can even snag your own life-sized, customizable R2-D2.

There’s also a place where you can make your own lightsaber, and a place to buy pet puppets of the animals found in Star Wars, like Salacious B. Crumb, the Kowakian monkey-lizard that sits on your shoulder — a favorite of Greg Ashton, an executive architect with Walt Disney Imagineering. “You got a little control you can make the thing bob its head, laugh and stuff,” explains Greg.

Millennium Falcon Smuggler’s Run — the only ride open in Galaxy’s Edge for now — is a motion simulator that seats six people who sit in the cockpit at once, and basically lets them be Han Solo or Chewbacca.

Food-wise, there’s everything from a cake-like dessert with passion fruit filling, to vegan meatballs and blue milk — a “galactic collection of plant based dairy that is a mixture of rice and coconut milk, according to Michelle Gendreau, Director of Food and Beverage for Disneyland Resorts.

ABC News is owned by Disney.

Retailers stock up on smaller turkeys for Thanksgiving due to pandemic
Netflix drops first look at Christian Serratos embodying Selena Quintanilla in ‘Selena: The Series’
What issues will win the Latino vote on Election Day?
Election 2020: How to spot voter intimidation and what to do
How to keep your newborn baby healthy during COVID-19 pandemic
Following confirmation to Supreme Court, Barrett takes first oath at White House