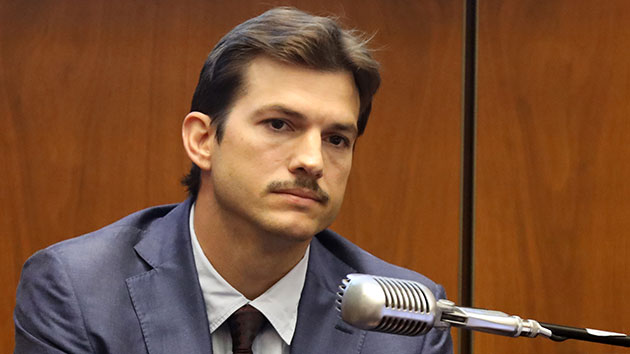 (LOS ANGELES) — Ashton Kutcher took the stand on Wednesday at the Los Angeles murder trial of the “Hollywood Ripper,” a.k.a. Michael Gargiulo, who faces two counts of murder in connection with the deaths of two women, including Kutcher’s friend Ashley Ellerin.

The 41-year-old The Ranch star, testified that on February 21, 2001, the night of the murder, he had planned to have dinner and drinks with Ellerin — whom he had met two months earlier — and called her to tell her he would be running late because he was watching the Grammy Awards at a friend’s house.

Later on, said Kutcher, he made several attempts to call Ashley but got no answer. When he got to her home, he saw the lights on and assumed she was home. He testified that he knocked on the door again and again, but still got no answer and assumed she had “bailed” on him because he was late.

Ashton then recalls looking through windows and seeing the place was a mess, but didn’t think anything of it because she had just moved in. Likewise, he didn’t think it was odd that he saw spilled wine on the carpet, because he had attended a party there a week earlier.

Ashton said he and Ashley met at a birthday party and that she was very friendly. He introduced her to a friend and they started dating. Kutcher also testified that he and Ellerin were not boyfriend and girlfriend, just acquaintances and friends. That night, he added, would have been their first date.

Gargiulo is also charged with the 2005 murder of Maria Bruno, and the attempted murder of Michelle Murphy, who was stabbed in her home in 2008. He is also facing a murder charge in Illinois in the 1993 death of Tricia Pacaccio, who was found stabbed to death outside her home.

“I’d be up for that!” Liam Neeson wants to re-join the ‘Star Wars’ universe with Disney+’s ‘Obi-Wan Kenobi’ show
‘WandaVision’ star Paul Bettany on his father’s struggle to come out of the closet
In scathing draft of letter never made public, Trump chided James Comey for ‘erratic,’ ‘self-indulgent’ conduct
‘Godzilla vs. King Kong’ stomps forward in WB’s 2021 release schedule
Steve Martin shares hilarious thoughts about getting the COVID-19 vaccine
Giuliani says he won’t represent Trump at president’s impeachment trial