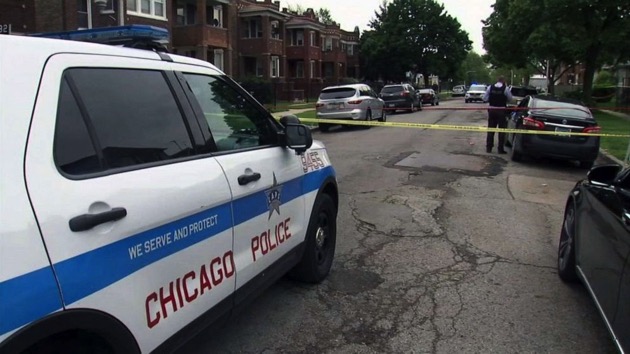 (CHICAGO) — Two men have been arrested in the murder of a woman who was shot dead in broad daylight in Chicago while holding a 1-year-old, according to police.Michael Washington, 39, and Eric Adams, 23, both of Urbana, Ill., have each been charged with first-degree murder, according to the Chicago police.The 24-year-old victim was standing on a sidewalk with a group of people Tuesday morning when the suspects got out of a silver sedan and began firing toward the group, said police.The 1-year-old child in her arms was unharmed, said police.The suspects fled the scene and were taken into custody Tuesday afternoon in Urbana, said police.While police did not identify the victim, Chicago community activist and former mayoral candidate Ja’mal Green said the slain woman was Brittany Hill and that the child in her arms was her daughter.Green told ABC News that Hill had been one of his classmates in high school.”When Brittany was shot, she shielded her baby, was hit and fell protecting her,” Hill said on Twitter. The child “survived and will have to grow up without her mother.”

When Brittany was shot, she shielded her baby, was hit and fell protecting her. She survived and will have to grow up without her mother.. what is life Chicago? #Tired #Hurt #RIHBritBrat pic.twitter.com/NqeEgNchpZ

“I’m sick and shocked and can’t believe it,” he said in the post. “We must step up and stop this violence.”Green said Hill is also survived by a young son.Washington and Adams are due to appear in bond court on Thursday, according to police.Copyright © 2019, ABC Radio. All rights reserved.