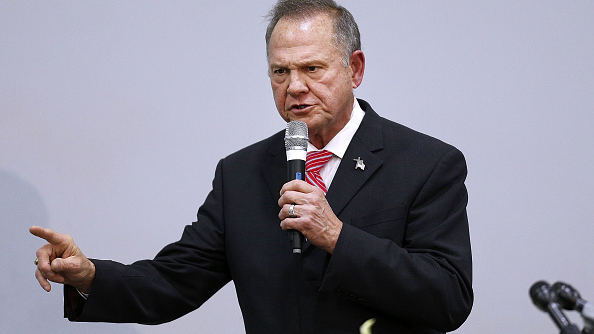 Jonathan Bachman/Getty Images
Posted on May 29, 2019 by ABC News

(WASHINGTON) — President Donald Trump warned Roy Moore on Twitter Wednesday that he should not run for the GOP nomination in Alabama to take on Democratic Sen. Doug Jones, saying the party’s fight against abortion was at stake.“I have NOTHING against Roy Moore, and unlike many other Republican leaders, wanted him to win. But he didn’t, and probably won’t,” Trump tweeted.Moore, whose 2017 Senate candidacy was stymied in part to accusations of sexual misconduct in the 1970s, is reportedly considering a 2020 rematch with Alabama Democratic Sen. Doug Jones.While acknowledging his prior support of Moore, Trump pointed out that Republicans need to put forth the strongest candidate to beat Jones in his 2020 Senate race to ensure that “many of the incredible gains” on issues such as the restrictive abortion laws in Alabama and across the country will not “be lost.”“Roy Moore cannot win, and the consequences will be devastating,” the president tweeted.Alabama is among several states that have passed what would effectively be abortion bans in recent months. On May 15, Gov. Kay Ivey signed a bill into law that would outlaw almost all abortions in Alabama, the only exception being in cases where the mother’s health is at risk.The law – the most restrictive signed this year — would make it a felony for a doctor to perform any abortion where the mother’s life is not at risk, with the threat of a 99-year prison sentence if they do.More than 350 pieces of legislation that would restrict abortion access have been introduced in states across the country this year, according to the Guttmacher Institute, a reproductive rights research group that was initially formed under Planned Parenthood but has been operating separately for years.So far in 2019, 17 bans have been signed in 10 states — but every type of bans is facing a legal challenge, and none of the laws have been enacted. In addition, while the passage of so-called “heartbeat” bans have received much attention in recent weeks, none of those laws are currently in effectGOP Rep. Bradley Byrne, who is running against Jones in the 2020 Alabama Senate race, told The Hill Tuesday that he believes, based off of conversations with those close to Moore, that the failed Senate candidate will announce a bid next month.Moore’s official Twitter account took notice, tweeting “What is Bradley so worried about,” before sending another Tweet saying, “He knows that if I run I will beat Doug Jones.”Those tweets prompted Donald Trump Jr. to chime in on the rumors Tuesday night, offering Moore some unsolicited advice on his future.”You mean like last time? You’re literally the only candidate who could lose a GOP seat in pro-Trump, pro-USA ALABAMA. Running for office should never become a business model. If you actually care about #MAGA more than your own ego, it’s time to ride off into the sunset, Judge,” he tweeted.