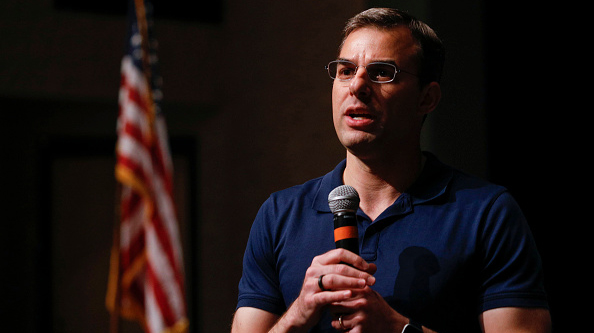 Bill Pugliano/Getty Images
Posted on May 29, 2019 by ABC News

(WASHINGTON) — Michigan Rep. Justin Amash opened his first town hall since calling for President Trump’s impeachment with a joke.”Read any interesting tweets lately?” he deadpanned to a Grand Rapids crowd, referring to a Twitter thread he posted earlier this month that outlined his “principal conclusions” that “President Trump has engaged in impeachable conduct.”As the sole congressional Republican to publicly say the president committed impeachable offenses based on conclusions in the Mueller report, Amash may have been prepared to face criticism. But instead he was greeted with applause as he continued to stand his ground before his constituents.”I think it’s really important that we do our job as a Congress, that we do not allow misconduct to go undeterred, that we not just say someone can violate the public trust and that there are no consequences to it,” Amash said.The Grand Rapids crowd seemed supportive of the five-term congressman’s position, at one point giving him a standing ovation. One town hall attendee commended Amash on his courage.President Trump won the area surrounding Grand Rapids by a little more than 3 percent in the 2016 election, and not everyone in attendance at the Grand Rapids Christian High School auditorium Tuesday voiced praise for the congressman.”I’ve been your supporter since you started running for Congress, and I can’t tell you how disappointed I am,” a woman wearing a ‘Make America Great Again’ hat told Amash, adding, “‘Violating the public trust’ is such a vague term.”Amid some heckling from the crowd, the woman went on to ask, “How can you become a Democrat when we voted for you as a Republican? You just drank all the same Kool-Aid as the Democrats.”Amash, a self-identifying libertarian Republican, pushed back on the accusation.”I haven’t changed, I am who I said I was,” Amash said. “I’m a principled constitutional conservative who has stayed consistent regardless of whether we have President Obama in office or President Trump.”Despite being a frequent Trump critic, Amash insisted he would have taken his position on impeachment regardless of the party of the sitting president.”I’m not just here to represent just one party, I’m here to represent everyone in the district whether you voted for me or didn’t vote for me,” he said.While Amash has not signed on to any existing impeachment resolutions proposed by Democrats, he said it is appropriate for Speaker Nancy Pelosi to proceed with impeachment inquiries and hearings. Ultimately, he says, the ball is in Pelosi’s court regarding how to go forward.”The speaker is really in charge of the House, and the speaker will make that determination,” he said. “No matter what any individual member of Congress wants to do, if the speaker is not on board, the thing is not happening.”