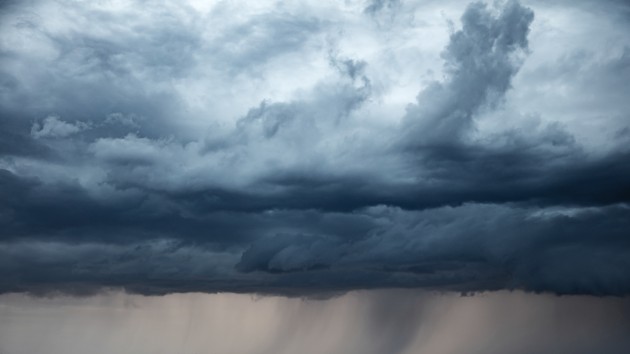 (NEW YORK) — An apparent tornado cut a swath of destruction through the outskirts of Lawrence, Kansas, on Tuesday evening, injuring 12 people and briefly shutting down Kansas City International Airport briefly due to damage from debris picked up by the vortex and carried up to 40 miles, officials said. Tuesday marked the 12th consecutive day where multiple tornadoes were reported throughout the country, according to the National Weather Service (NWS). And it wasn’t just the heartland that was left in shambles. A powerful storm that had all the markings of a suspected twister slammed Atlantic County, New Jersey, Tuesday night, downing trees and powerlines, and leaving residents with frayed nerves. Parts of Pennsylvania also reported damaged and NWS officials are investigating whether a tornado was responsible. The NWS issued a “tornado emergency” alert for parts of eastern Kansas on Tuesday night as dangerous weather touched down in the area. Brian Christenson, the mayor of Linwood, Kansas, a suburb of Lawrence, said on ABC’s Good Morning America Wednesday that while multiple residents in his city of nearly 400 people lost homes, no one was killed and everyone was accounted for.”I’ve never seen anything like it,” Christenson said. “It just picks one house randomly and takes it away, and the next house might not even get touched. The way it moves and picks and chooses, it’s incredible.” Christenson said he and the bulk of people in his town heeded the early-warning sirens and alerts and sought shelter before the suspected funnel cloud reached them. “I’ve lived in the same home for 22 years,” the mayor said. “This was the first time I’ve ever actually went to my basement for shelter.” But even those who rode out the storm in the basements walked away with their lives — but not much else. “There’s a friend of mine that was in their basement and there’s nothing left,” Christenson said. “It took the house, the carpet off the floor. Everything is gone.” Police in Lawrence, the home of the University of Kansas, said a massive tornado left large trees, power lines and debris along the streets, making some major roads impassable. Twelve people suffered mostly minor injuries in the town and adjacent communities, according to a Lawrence Memorial Hospital spokesperson. One saving grace was that the University of Kansas is already out for the summer. Kansas City International Airport said two flights were diverted and passengers waiting in the airport were rushed to the parking garage tunnels at about 7 p.m. An “all clear” was given about 45 minutes later. The airport remained closed, however, due to “unsafe conditions from area storm debris.” The airport reopened after 11 p.m. local time. “Most structural damage appears to have occurred near Lawrence as the tornado passed just outside the city limit,” Lawrence Police Department officials said in a tweet. “Please do not go sight seeing tornado damage. This only hampers the efforts of emergency workers.” There were also about 13,000 customers without power in the Lawrence area late Tuesday. Tornadoes devastated parts of Ohio on Monday night, leveling homes and leaving thousands without water and power. One 81-year-old man was killed in Celina, Ohio, when a vehicle was thrown into his home, the mayor of the town said. “I don’t know that any community is fully prepared for this type of devastation,” Dayton Assistant Fire Chief Nicholas Hosford said Tuesday on Good Morning America. “We have homes flattened, entire apartment complexes destroyed, businesses throughout our community where walls have collapsed.”Residents near New York City also braced for a possible tornado, but despite warnings it did not materialize. The NWS issued tornado warnings for several counties surrounding Manhattan on Tuesday evening, urging residents in the path of the “dangerous storm” to stay inside. The service had said the storms could produce hail the size of quarters.”Flying debris will be dangerous to those caught without shelter,” the NWS said in a statement. “Mobile homes will be damaged or destroyed. Damage to roofs, windows, and vehicles will occur. Tree damage is likely. This Tornado Warning replaces the Severe Thunderstorm Warning issued for the same area.” The warning covered areas surrounding Staten Island and parts of northeastern New Jersey, including Hudson County, Union County and southern Essex County. Severe weather hit Lenape Valley Regional High School in Stanhope, New Jersey, on Tuesday night. An event at the school was going on at the time, but Mayor Rosemary Maio confirmed no one was injured. On Wednesday morning, Stanhope was littered with down trees and power lines. The weather service is sending a team to Stanhope to determine if the ferocious weather was indeed a tornado. Helicopter aerial footage from ABC station WABC-TV in New York City showed a 1.2 mile path of damage from Stanhope to Hopatcong that included toppled trees and power lines in the Stanhope area. About 25 students, teachers and parents huddled in an auditorium at Lenape Valley Regional High School when the storm hit. No one was injured.