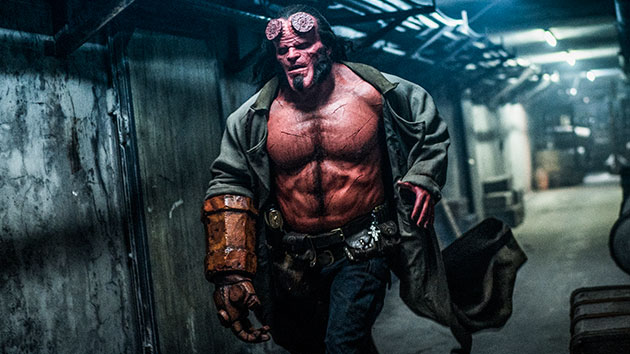 (LOS ANGELES) — Last month’s attempt to reboot the Hellboy franchise was a critical and commercial disappointment, and a personal disappointment for actor David Harbour.

The Stranger Things star — who played the eponymous, red-skinned demon-hero in the film — lamented to Digital Spy, “We did our best, but there’s so many voices that go into these things and they’re not always going to work out,” hinting of creative tension behind the scenes.

Harbour allowed, “I did what I could do and I feel proud of what I did, but ultimately I’m not in control of a lot of those things.”

The actor, who’s also starring in the upcoming Black Widow film for Marvel Studios, addressed that studio’s success versus Hellboy.

“The problem that I have with comic book movies nowadays is … — and it’s a result of the power of Marvel stuff — It’s like chocolate. It’s a flavor. So everybody goes, ‘Chocolate is delicious and these guys make the best chocolate.’ So as you judge the movies, it’s like, ‘Well it’s not as chocolatey as this, this does not taste like chocolate at all."”

“And I sort of want a world where there’s more flavors than…chocolate. So in that way when Hellboy is viewed on the chocolate spectrum, it does very poorly,” said Harbour, who nonetheless conceded of the movie, “That being said, it also has major problems.”Even so, Harbour hopes people catch up to his movie.

“I think as a rental or as a movie that you see on an airplane, I think you’d be like, ‘Oh that was fun,"” said Harbour, “because it’s a fun movie, and I think it was unfairly bludgeoned as a result of these comparisons.”Marvel Studios is owned by Disney, the parent company of ABC News.