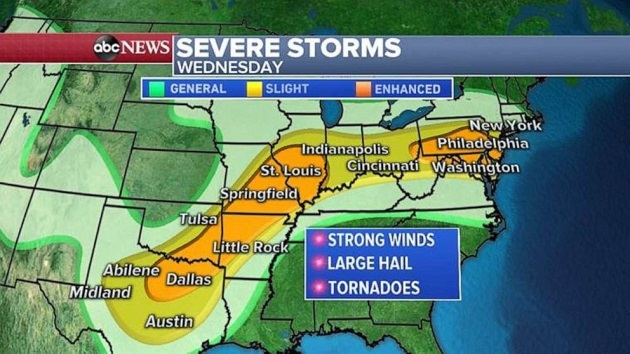 (NEW YORK) — After 19 reported tornadoes across five states on Tuesday, another day for severe weather is in the offing on Wednesday.In the last 12 days, the U.S. has had 352 reported tornadoes in 22 states from California to New Jersey. In fact, this May has been the most active month for tornadoes since April 2011, when there were more than 800 reported tornadoes. Unfortunately, more severe weather is forecast Wednesday from Texas to New York, including tornadoes, damaging winds and large hail.The biggest threat for tornadoes Wednesday will be from Texas into southeastern Oklahoma and into western Arkansas. That includes the Dallas metro area.The Northeast and Mid-Atlantic will see severe storms again Wednesday — mostly with damaging winds and hail, but an isolated tornado or two cannot be ruled out. Major cities in the Northeast that will see these damaging storms include New York City, Philadelphia, Baltimore and Washington, D.C.More heavy rain is expected with these storms, which could bring flash flooding from Texas all the way to New Jersey.In the next 24 to 36 hours, as much as 6 inches of rain could fall, especially from northern Texas into eastern Oklahoma and western Arkansas. These areas are dealing with historic flooding and cannot take any more rain. Historic flooding will continue for the Arkansas River because of the coming rain.Finally, there is some good news. It looks like Wednesday will be the last big severe weather day.Over the next couple of days the pattern will shift slightly, giving most of the U.S. a break from severe storms and tornadoes.