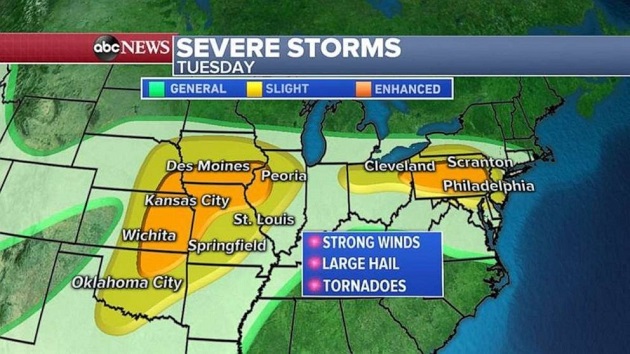 (NEW YORK) — A massive tornado that tore through one of Ohio’s largest cities Monday night leveled homes and entire apartment complexes and knocked out power and water to tens of thousands of people.The devastating twister, rated by the National Weather Service as at least an EF3 on the Enhanced Fujita scale, struck Dayton, Ohio, which has a population of more than 140,000, carving out a hopscotching path of damage that left people scrambling for their lives.”I don’t know that any community is fully prepared for this type of devastation,” Dayton assistant fire chief Nicholas Hosford said Tuesday on ABC’s Good Morning America.The National Weather Service said more than 50 tornadoes were reported in the United States over Memorial Day weekend and that severe weather was threatening 60 million Americans Tuesday afternoon from Texas to New York.Despite the widespread destruction assessed during a tour of Dayton at daybreak, Hosford said there were no reports of fatalities in Dayton or the adjacent communities.Dayton fire chief Jeffrey Payne said only three people suffered minor injuries in Dayton. But officials at area hospitals said they treated a total of 64 people from Dayton and the surrounding communities.”We have homes flattened, entire apartment complexes destroyed, businesses throughout our community where walls have collapsed,” Hosford said.Ohio Gov. Mike DeWine, who surveyed the damage from a helicopter, said it was “shocking.”DeWine said he will immediately begin the process of declaring a state of emergency and will ask the federal government for disaster relief.One storm-related fatality occurred in Celina, Ohio, about 80 miles northwest of Dayton, according to the Mercer County Emergency Management Agency. Celina Mayor Jeffrey Hazel told ABC affiliate WKEF-TV in Dayton that an 81-year-old man was killed when a vehicle was thrown into his house.At a noon news conference with Gov. DeWine, Hazel added that at least 40 homes in Celina were destroyed or damaged by the EF3 tornado that generated winds of up to 140 miles per hour.In Pendleton, Ind., about 100 miles west of Dayton, 75 homes were damaged by the storm, which also caused multiple gas leaks, officials said.In Harrison Township, about 5 miles north of Dayton, fire chief Mark Lynch said at a news conference that the town appeared to be hit by “World War III” and that it will take “several years of rebuilding.”Standing in front of a collapsed Family Dollar Store in Harrison Township, Montgomery County Sheriff Rob Streck said his deputies responded to numerous calls for help late Monday night and into Tuesday morning.”There were numerous calls where people were trapped in their homes and law enforcement would have to go to the scene,” said Streck, adding that several deputies were hurt in the rescue efforts, some from stepping on nails.Streck has a warning for anyone thinking of looking damaged homes: “They are going to my jail and then they’re going to be prosecuted.”The tornado that slammed Dayton knocked down the steeple of the New Life Worship Center as 25 people sought shelter in one of the church’s restrooms, survivors said.”It was the scariest 15 seconds of my life,” Blake Gifford, one of the people who took shelter in the church restroom, told WKEF.He said conditions went from “dead quiet to a jet engine taking off” when the twister touched down.”I was praying, asking God to keep us safe,” Gifford said. “We’re lucky, we’re lucky to be here.”At one point, more than 70,000 people across Ohio, including 50,000 in the Dayton area, were without power early Tuesday morning, said U.S. Sen. Rob Portman, R-Ohio. Hosford said electricity to major pumping stations was knocked out and residents were being asked to conserve water.Local authorities used snowplows to clear debris from major thoroughfares.While Hosford said he was unaware of anyone reported trapped in the rubble. Search-and-rescue teams were going door-to-door in hard-hit neighborhoods to make sure everyone got out of harm’s way when the buzzsaw-like funnel cloud stuck.”I think the reduction in injuries is in key part to the early notification and people taking those warning seriously, moving to safe areas of their homes,” Hosford said.But in other tornado-ravaged communities, including El Reno, Oklahoma, where a twister, rated an EF3 on the Enhanced Fujita scale, decimated the town and killed two people on Sunday night, residents said they received little warning of the impending disaster.On Memorial Day, 51 tornadoes were reported across eight states — Idaho, Colorado, Nebraska, Iowa, Minnesota, Illinois, Indiana and Ohio — and severe weather is forecast to continue Tuesday and Wednesday.The area with the biggest threat for tornadoes on Tuesday is from Kansas City to western Illinois, where the National Oceanic and Atmospheric Administration also forecasted baseball size hail.Parts of Ohio and Pennsylvania also are also at risk again for tornadoes on Tuesday, while other areas including Oklahoma City and parts of Texas may again see damaging wind and hail.Similar threats on Wednesday will stretch from Texas all the way to New Jersey, with tornado threats highest in the southern Plains. More heavy rain could mean more flooding.A day after Chicago’s wettest Memorial Day ever, with nearly 2 inches of rain reported, seven states from Montana down to Texas are under flood alerts.The Arkansas River near Forth Smith is approaching record flood levels, which could produce major flooding in Little Rock by the end of the week.Rainfall from Texas all the way into the Northeast could be substantial and contribute to more flash flooding.