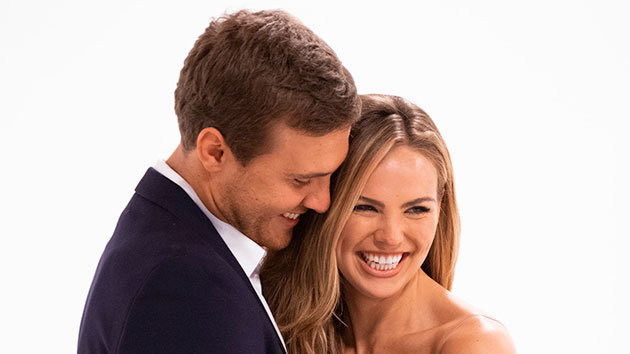 Peter and Hannah Brown; ABC/John Fleenor
Posted on May 28, 2019 by ABC News

(NEW YORK) — On Monday night’s episode of The Bachelorette, Hannah was back in “beast mode,” putting one man in his place and sending another one home.

In the first group date, Jonathan, Mattao, John Paul Jones, Kevin, Jedd, Tyler C., Mike and Cam‘s knowledge of childbirth is tested by husband and wife actors Jason Biggs from the American Pie movies, and Orange Is the New Black’s Jenny Mollen, from the TV series Angel and Crash. The guys are put through a series of tests aimed at seeing how well they would hold up to the experience of giving birth, including a labor simulator that has them walking away with new respect for the pain women go through during childbirth.

At the cocktail party afterwards, Mike shared a heart-breaking story with Hannah about him and his ex-girlfriend getting pregnant, then losing the child in the second trimester. Meanwhile Cam, a villain last week for crashing a group date, played the bad guy again, this time by trying to interrupt Mike’s conversation with Hannah several times over.

Jonathan decided to give Cam a taste of his own medicine, cutting short his time with Hannah and leading to a brief confrontation between the two. At the end of the night, it was Mike picking up the date rose.

Monday’s one-on-one date went to Connor S. However, there was good and bad news waiting for him. The bad: a health scare sent Hannah to the emergency room and forced her to cancel the date. The good: She invited Connor up to her hotel room to keep her company. After a brief getting-to know-you session, Hannah said she needed to get some rest, and Connor politely headed back to the mansion, but not before leaving little love notes scattered throughout her hotel room.

Hannah ate it up, and later, when she was feeling better, summoned Connor back to finish their date, where he was given the date rose and treated to a private performance from Danish pop and soul band Lukas Graham, performing their hit, “Love Someone.”

The second group date included Luke P., Dylan, Garrett, Luke S., Devin, Joey, Grant and Peter, who all went on a photo shoot with professional models — who turned out to be adorable animals. Unbeknownst to the guys, Bachelor season 23 contestant Demi was once again spying on them, while actors, hired to play a makeup artist and animal handler, asked them questions about Hannah. To Hannah’s relief and Demi’s disappointment, the guys all passed with flying colors.

However, the pressure of competing with so any eligible bachelors was clearly getting to last week’s other villain Luke, who tried to have Hannah all to himself. The guys were clearly upset with his performance, as was Hannah, who took him aside at the cocktail party to tell him he was getting a little too “cocky” about how their relationship was progressing, and needed to give the other guys a chance. Later, after his attempts to break into other conversations were denied, he told the men he was ready to leave the competition.

When the party was over, Peter went home with the coveted date rose.

Back at the mansion, host Chris Harrison informed the men that Hannah was ditching the traditional pre-rose cocktail party, in favor of a tailgate party. Cam once again irritated the guys by saying he needed time with Hannah to tell her a personal story, which they saw as an attempt to earn a “pity rose.” While alone with her, he recited a laundry list of personal tragedies in his life that seemed to gain her sympathy.

Mike retaliated by telling Hannah that Cam had written letters to the other guys, about his fear of being sent home, as well as his scheme to get the rose. When she confronted Cam with the accusations, he fessed up to writing the letters, but vehemently denied playing the pity card. Hannah was skeptical though and said the timing of his story felt “manipulative,” and that the whole thing felt “really schemy and slimy” to her.

When the roses were handed out, Cam — along with Joey and Jonathan — were odd men out.

Earlier, it was revealed that, for an undisclosed reason, Tyler G., the 28-year-old psychology graduate student from Boca Raton, Florida, was forced to leave the competition.

The 15 remaining men are:

The Bachlorette returns Monday at 8 p.m. ET on ABC.

Elliot Page and Emma Portner announce divorce after three years of marriage
John David Washington talks following in the footsteps of his Oscar-winning dad, Denzel Washington
Watch now: Action and joke-packed trailer for Disney’s animated ‘Raya and the Last Dragon’
Vanessa Bryant remembers Kobe and Gianna on one-year anniversary of their deaths
Biden says he will replace the entire federal fleet with electric vehicles
What to know about the link between mental health and heart disease