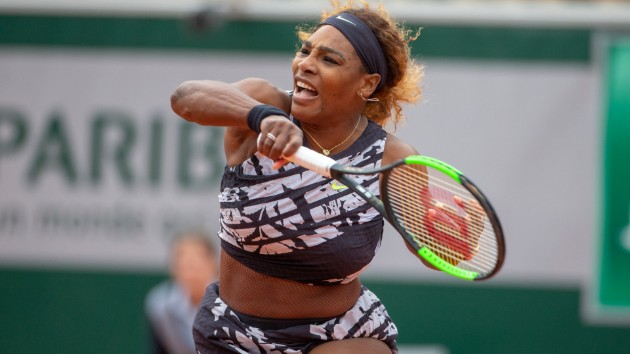 Tim Clayton/Corbis via Getty Images
Posted on May 28, 2019 by ABC News

(PARIS) — If anyone thought Serena Williams would tame her fashion after last year’s French Open catsuit controversy, she proved them wrong.Williams, 37, took to the court Monday for her debut match at the 2019 French Open in her designer, superhero-inspired outfit. Williams chose to go without the look’s dramatic cape though to face off against Russian player Vitalia Diatchenko, whom she defeated 2-6, 6-1, 6-0.Williams’ full French Open look, a collaboration between Nike and designer Virgil Abloh, is not your average tennis skirt.It features ruffles, a crop top, black and white print and the cape — reportedly with the words “Mother, Champion, Queen, Goddess” printed on it in French — that gives it a superhero vibe.It follows last year’s controversy that saw Williams wear a Black Panther-inspired bodysuit earlier to mark her return to her first major tournament since giving birth to her daughter in 2017.Williams, who dealt with life-threatening postpartum complications related to a pulmonary embolism, said the fitted suit was designed to protect her against blood clots.She also used the catsuit as a form of inspiration for other moms, writing on Instagram, “Catsuit anyone? For all the moms out there who had a tough recovery from pregnancy—here you go. If I can do it, so can you. Love you all!!”While Williams’ catsuit won’t be seen again at the French Open, her boldness did help score a victory for female tennis players.The Women’s Tennis Association (WTA) now allows for leggings and mid-thigh length compression shorts to be worn with or without a skirt, shorts or dress. The WTA’s rules only apply to regular tournaments, not to the four Grand Slam tournaments, including the French Open, which each have their own set of rules.