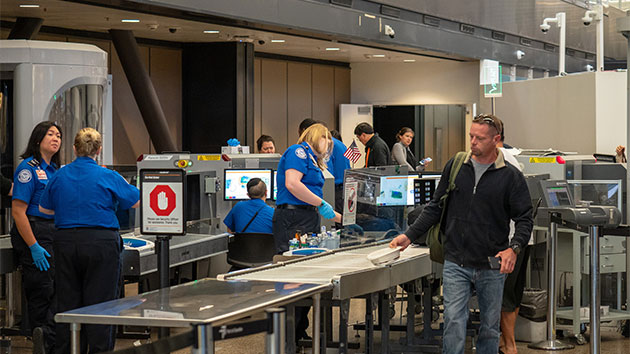 (NEW YORK) — Travelers may need to think twice about the change they leave behind as they race through TSA screening checkpoints to make their flights. In 2018, all those dimes, quarters, pennies and nickels added up to more than $960,000.The unclaimed money, which included $85,000 in foreign currency, is deposited into a special fund in order for the agency.The unusual source of revenue for the TSA has been on the rise over the past several years, up from $867,812 in 2016 and $869,837 in 2017.“TSA always seeks to make sure that all traveler property, including loose change, finds its way back to the proper owner,” the agency said in a report acquired by ABC News. “However, when loose change does not, it will be directed to critical aviation security programs.”Since 2005, Congress has directed the TSA to account for unclaimed money at individual airports, and direct it towards airport security costs.The agency has used unclaimed funds in previous years to pay for checkpoint maintenance, translation of checkpoint signage into different foreign languages and adjudication center enhancements.Though questions have swirled this year about whether loose change could be used by the Department of Homeland Security to fund border operation expenses.Here are the top 5 airports where the most money was left behind in 2018:1) John F. Kennedy Intl (JFK) $72,392.742) Los Angeles Int’l Airport (LAX) $71,748.833) Miami Int’l Airport (MIA) $50,504.49 4) O’Hare Int’l Airport (ORD) $49,597.235) Newark Int’l Airport (EWR) $41,026.07Copyright © 2019, ABC Radio. All rights reserved.