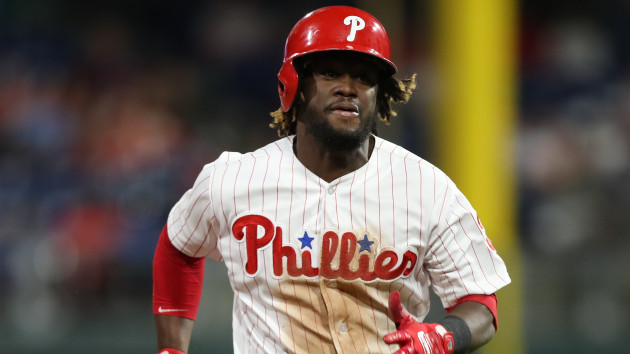 (ATLANTIC CITY, N.J.) — Philadelphia Phillies outfielder Odubel Herrera was arrested on Monday night after his girlfriend reported that he had assaulted her.The Atlantic City Police Department said in a statement posted on Facebook that officers responded to the Golden Nugget Hotel and Casino to a report of domestic violence. The officers reportedly found Herrera’s 20-year-old girlfriend with “visible signs of injury to her arms and neck…sustained after being assaulted by her boyfriend.”The woman refused medical attention. Officers located Herrera in a hotel room and arrested him without incident. He was later released.In a statement, the Phillies said they reported the incident to the league immediately after learning about it. “The Phillies take any domestic violence accusation seriously,” the statement said. Major League Baseball has placed Herrera on administrative leave under the league’s domestic violence policy. He will be inactive for up to seven days while the league investigates the incident. That leave can be extended while the league’s probe continues. Copyright © 2019, ABC Radio. All rights reserved.