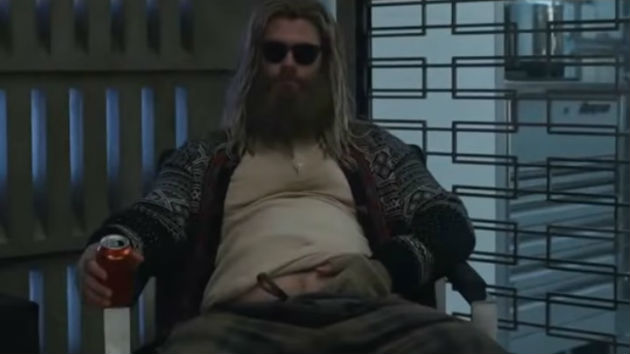 (LOS ANGELES) — (SPOILER ALERT) In a wide-ranging feature in Variety, Chris Hemsworth discussed one of the biggest chances the filmmakers took in Avengers: Endgame: transforming Thor’s normally divine physique from god-bod to dad-bod.

The transformation, while a hysterical “reveal,” wasn’t just done for comic shock value. The idea was Thor — having failed to stop Thanos from wiping out half of all living things at the end of Avengers: Infinity War — would be wracked with guilt, and let himself go on a diet of beer and Cheez Whiz.

“Boy, did he go bonkers,” says Robert Downey Jr. of Hemsworth’s transformation. “He went out to the bleeding edge…” Iron Man’s alter-ego adds, “He went out into some pretty risky atmosphere of nuttiness.”

“I enjoyed that version of Thor,” Hemsworth says, explaining he fought to keep the God of Thunder’s paunch throughout the movie, nixing the original idea that he’d return to his previous, buff physique during Endgame’s climax.   Hemsworth says, “Physically, it was a good three hours in hair and makeup. Then the prosthetic suit, particularly for the shirt-off scene, that was a big silicone that weighed about 90 pounds. It was certainly exhausting. I had weights on my hands and ankles just to have my arms and legs swing differently when I shuffled along through the set.”

There was one other downside, he explains. “[Y]ou get sick of it when people come up and grab your belly. ‘Don’t grab me like that!’ I know how my wife [actress Elsa Pataky] felt when strangers would come up and rub her [pregnant] belly.”