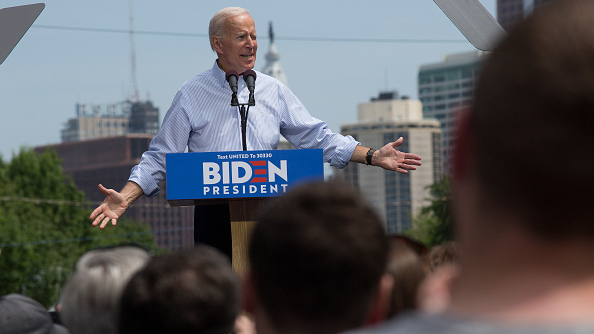 Andrew Lichtenstein/Corbis via Getty Images
Posted on May 28, 2019 by ABC News

(WASHINGTON) — Former Vice President Joe Biden’s campaign hit back Tuesday at criticism from North Korean leader Kim Jong Un and President Trump, who both called the 2020 presidential candidate a “low IQ” individual.”The President’s comments are beneath the dignity of the office. To be on foreign soil, on Memorial Day, and to side repeatedly with a murderous dictator against a fellow American and former Vice President speaks for itself. And it’s part of a pattern of embracing autocrats at the expense of our institutions — whether taking Putin’s word at face value in Helsinki or exchanging ‘love letters’ with Kim Jong Un,” Kate Bedingfield, Biden’s deputy campaign manager said in a statement.Last week, an editorial published on the website of KCNA – the North Korean state news agency, issued a list of criticisms against Biden, also saying the presidential candidate’s bid for office “should not carry high expectations.”President Trump, who in the past had called Biden “a low IQ individual” subsequently tweeted that he “smiled” when North Korea called “Swampman Joe Biden a low IQ individual.”During a press conference in Tokyo with Japanese Prime Minister Shinzo Abe, Trump doubled down supporting Kim Jong Un’s comments about Biden. “Kim Jong-Un made a statement that Joe Biden is a low IQ individual. He probably is based on his record. I think I agree with him on that,” Trump said. Trump went on to attack Biden’s time serving as Vice President in the Obama administration. “I can tell you that Joe Biden was a disaster, his administration with President Obama, they were basically a disaster when it came to so many things,” the president said. “Whether it was economy, whether it was military, defense, no matter what it was. They had a lot of problems. So I’m not a fan.”Biden’s campaign previously responded to the North Korean leader’s critiques saying “it’s no surprise North Korea would prefer that Donald Trump remain in the White House.””As Vice President Biden said in Philadelphia, Donald Trump ’embraces dictators and tyrants like Putin and Kim Jung Un’ while alienating our closest allies. That is antithetical to who we are and it has to change,” Biden campaign spokesperson Andrew Bates recently told ABC News. “Trump has also been repeatedly tricked into making major concessions to the murderous regime in Pyongyang while getting nothing in return. Given Vice President Biden’s record of standing up for American values and interests, it’s no surprise that North Korea would prefer that Donald Trump remain in the White House.”