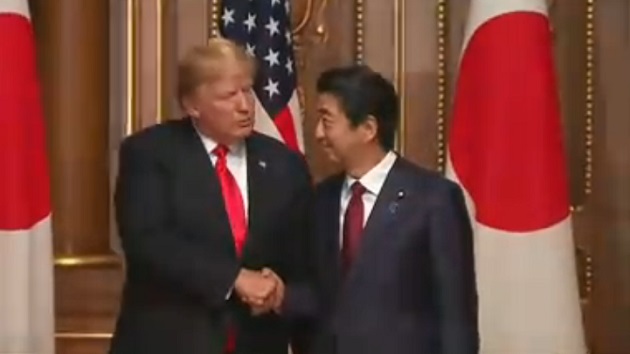 (TOKYO) — President Donald Trump said he’s not concerned by North Korea’s recent missile tests and endorsed brutal dictator Kim Jong Un’s attack on fellow American and former Vice President Joe Biden in a press conference in Tokyo Monday.”Kim Jong-Un made a statement that Joe Biden is a low IQ individual. He probably is based on his record. I think I agree with him on that,” Trump said.Trump was asked if he is siding with a dictator over a fellow citizen and former U.S. vice president. Trump responded that he doesn’t take sides and, on foreign soil, went on to call the Obama administration a “disaster.”“I can tell you that Joe Biden was a disaster, his administration with President Obama, they were basically a disaster when it came to so many things,” the president said. “Whether it was economy, whether it was military, defense, no matter what it was. They had a lot of problems. So I’m not a fan.”Despite Trump and Abe saying that they are on the same page when it comes to North Korea, Trump has downplayed the North’s recent missile tests — drawing a sharp contrast to the assessment of his own national security advisor and his Japanese host.“My people think it could have been a violation, as you know,” the president said. “I view it differently. I view it as a man, perhaps he wants to get attention, and perhaps not. Who knows? It doesn’t matter. All I know is that there have been no nuclear tests. There have been no ballistic missiles going out. There have been no long-range missiles going out. And I think that someday we’ll have a deal.”Yet the president’s national security adviser John Bolton said that the recent missile tests are “no doubt” violations of U.N. Security Council resolutions.Trump said he is in “no rush” for North Korea to denuclearize.“I am very happy with the way it’s going. And intelligent people agree,” he added, praising Kim as a “smart man.”The president will be back in Japan at the end of next month for the G-20 summit as a trade war with China looms. Though Trump said in the press conference today that the U.S. is not ready to make a trade deal with China, the president’s economic advisor said earlier this month that there is a “strong possibility” of a meeting between Trump and Chinese leader, Xi Jinping, at the meeting.