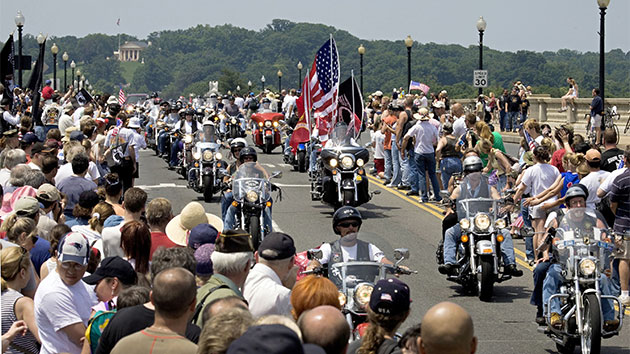 Brendan Smialowski/Getty Images
Posted on May 27, 2019 by ABC News

(WASHINGTON) — President Donald Trump said Rolling Thunder will be back in Washington next year — just hours before the motorcycle rally was set to hold its final event in the nation’s capital.

“The Great Patriots of Rolling Thunder WILL be coming back to Washington, D.C. next year, & hopefully for many years to come,” the president tweeted Sunday morning. “It is where they want to be, & where they should be. Have a wonderful time today. Thank you to our great men & women of the Pentagon for working it out!”

The announcement to extend the rally for at least another year came as motorcyclists had started gathering in the nation’s capital Sunday for the noon ride.

The national ride started in 1988 and has gradually accumulated support — netting more than a half a million participants last year. It is a demonstration to bring attention to and demand accountability for prisoners of war and those who are missing in action.

In December, one of the advocacy group’s co-founders said that, after 31 years, this year’s Memorial Day would be the last because of funding.

In 2018, the ride drew more than half a million participants, but rising costs and “increased harassment” from the Pentagon and police in Washington led the group to decide the ride was no longer feasible, according to its founder and executive director Artie Muller.

Pentagon spokesperson Sue Gough pushed back on these claims in a statement to ABC News in December.

“The department supports the peaceful, lawful exercise of American citizens’ First Amendment rights, and remains focused on ensuring the safety and security of the demonstrators and the Pentagon Reservation,” Gough said. “The department is prepared to support the 2019 Rolling Thunder ride, as we have for the last 31 years.”

Veterans Affairs Secretary Robert Wilkie was scheduled to give a speech at Sunday’s rally.

Rolling Thunder organizers have not announced any changes to their schedule. The organization’s website had information about the 2019 event and its Twitter feed was filled with photos from the weekend’s events.

Back in December, Joe Chenelly, the executive director of AMVETS, urged participants on Twitter not to cancel their hotel reservations for 2020.

“We have been concerned this was coming for some time, so we’ve prepared,” he wrote last year. “We will not let this vital demonstration in our nation’s capital end.”