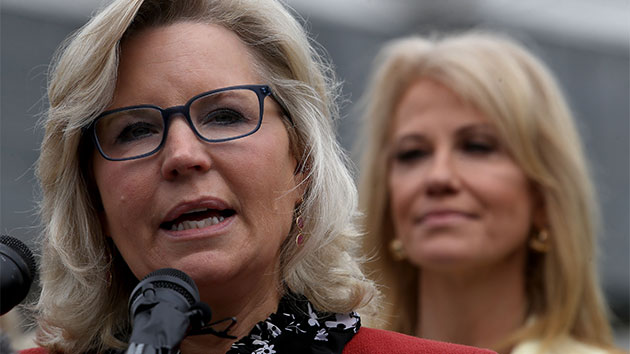 (WASHINGTON) — When asked to respond to President Donald Trump’s Saturday night tweet, in which he said that he “has confidence” in North Korean leader Kim Jong Un on nuclear talks and praised Kim’s criticism of former Vice President Joe Biden, Rep. Liz Cheney, the chairwoman of the House Republican Conference, only said that Trump is “doing the right thing in terms of the policy” with North Korea.

On “This Week,” co-anchor Martha Raddatz asked Cheney three times for a response to the tweet, in which Trump said “North Korea fired off some small weapons, which disturbed some of my people, and others. but not me, I have confidence that Chairman Kim will keep his promise to me, & smiled when [Kim] called Swampman Joe Biden a low IQ individual,” perhaps to send the U.S. president “a signal.”

North Korea fired off some small weapons, which disturbed some of my people, and others, but not me. I have confidence that Chairman Kim will keep his promise to me, & also smiled when he called Swampman Joe Biden a low IQ individual, & worse. Perhaps that’s sending me a signal?

“What do you think about what the president said there about a murderous dictator?” Raddatz asked Sunday.

“You know, I think that what we have seen so far with this president with respect for North Korea is that he’s doing the right thing in terms of the policy. North Korea has for years, through presidencies of Republicans and Democrats, gone through the exact same steps where they try to make false promises and they get concessions from the United States and they continue their program,” said Cheney, who is also a member of the House Armed Services Committee.

“He’s walked away from the table. The North Koreans wouldn’t comply. So I would say you got to judge based on actions. You got to look where we are today, and where we are today is the president walked away. He was not willing to accept a phony deal which too many of his predecessors have been.”

Raddatz noted there still hasn’t been significant progress toward denuclearization, and again asked for a response to the tweet.

“Is that the right way to do things?” she said.

“My view, Martha, is that we are doing the right thing in terms of the policy towards North Korea,” Cheney said, without acknowledging the president’s comments on Biden.

A Biden campaign aide responded to the tweet, telling ABC News on Saturday, “I would say the tweet speaks for itself, but it’s so unhinged and erratic that I’m not sure anyone could even say that with a straight face.”

The Wyoming Republican defended the president on a number of foreign policy issues in addition to North Korea, including on Iran and military readiness, and criticized the situation he “inherited” from the previous administration.

“He’s providing the resources our military needs to begin to make sure that we can defeat our enemies and our adversaries. He withdrew from the devastating Iranian Nuclear Accord. And with respect to the North Koreans, he has said, I will not accept a deal that is not a deal that helps advance this situation,” she said on “This Week.”

Raddatz asked about the administration’s decision to send 1,500 more troops to the Middle East to continue to help deter Iran.

Cheney said she supports the decision and added that Trump is “doing exactly the right thing.”

“When you look at what we’ve seen in terms of the threat level, what we’ve seen in terms of what the Iranians have now — are now doing … there’s no question but that this threat … is not business as usual,” she said. “And it’s very important for the Iranians to understand that we’ll do what’s necessary to deter them from attacking us or our interests and that we’ll do what’s necessary to make sure they understand we aren’t going to simply sit back and allow them to take action that will put our people in harm’s way.”

Asked about the sparring between Trump and House Speaker Nancy Pelosi this past week, Cheney accused the speaker of “increasingly losing her grip on the leadership of her conference.”

Cheney said Democrats hoped special counsel Robert Mueller’s report would deliver them “evidence they needed to move to impeachment,” but it didn’t.

“So now what they’re doing is basically taking all the oxygen out of the room, refusing to do any of the things we were elected to do and instead continuing these attacks and partisan investigations,” she said.

However, on Wednesday, it was the president who walked out of a meeting with Pelosi and Senate Minority Leader Chuck Schumer during which they were supposed to discuss infrastructure. Shortly before the meeting started, Pelosi had accused Trump of being engaged in a “cover-up” on investigations.

“So I just wanted to let you know that I walked into the room and I told Sen. Schumer and Speaker Pelosi, ‘I want to do infrastructure. I want to do it more than you want to do it. I’d be really good at that. That’s what I do. But you know what? You can’t do it under these circumstances. So get these phony investigations over with,"” Trump said during an impromptu speech in the Rose Garden Wednesday.

Later, when asked about Trump’s tweet calling Democrats the “do nothing party,” Schumer said, “He should look at all the bills the House passed and how many of them [Senate Majority Leader Mitch] McConnell has put on the floor. The answer is none because McConnell has made the Senate a graveyard. We should be debating issues like health care, like cleaning up the swamp, like net neutrality, like supporting equal rights. We’re not debating any of them.”

In a Thursday night memo, the president gave Attorney General William Barr broad authority to declassify information related to investigations relating to the 2016 presidential campaigns, including the investigation into Russian election interference that was taken over by Mueller. The memo also directed the intelligence community to fully cooperate with Barr’s review.

Trump said Friday that the purpose was to see “how the hoax or witch hunt started and why it started,” calling it “an attempted coup or an attempted takedown of the president of the United States.”

Thursday, prompted with a question that made clear treason is punishable by death in the Constitution, Trump pressed his point when he said “a number of people” may be guilty of it in pursuing the Russia investigation.

Cheney echoed the president’s claims, and said “the attorney general has got to get to the bottom of what happened.”

“I think what is really crucially important to remember here is that you had Strzok and Paige who were in charge of launching this investigation and they were saying things like we must stop this president, we need an insurance policy against this president,” she said. “That in my view when you have people that are in the highest echelons of the law enforcement of this nation saying things like that, that sounds an awful lot like a coup and it could well be treason.”