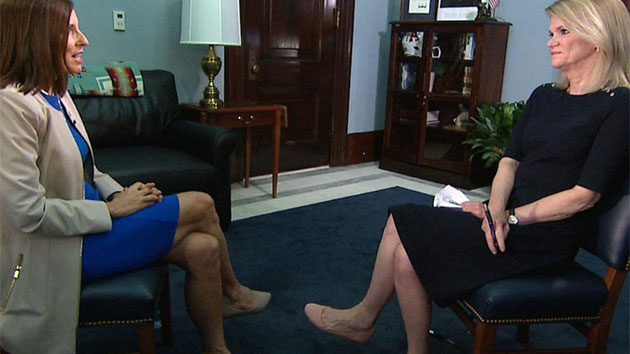 (WASHINGTON) — Since publicly sharing her own experience of sexual assault while serving in the U.S. Air Force, Sen. Martha McSally, the first female fighter pilot to fly in combat, has introduced legislation aimed at changing the way the military handles sexual assault, but keeping the investigations within the chain of command.

“If you want to solve anything in the military, you have to have commanders more involved,” the Arizona Republican, who herself served as a commander, told “This Week” co-anchor Martha Raddatz in an interview. “It’s like no other position in civilian life. I mean, we tell people to go take lives, maybe to give their own life. We are responsible for every element of their — everything that they do.”

The Combating Military Sexual Assault Act, which is co-sponsored by Sens. Thom Tillis, Rick Scott and Mike Rounds, focuses on four key areas — prevention and training, victim support, investigation and prosecution. According to McSally’s office, 17 out of the 18 provisions from the senator’s bill are included in a key military spending bill that passed in committee earlier this week.

“The problem is that we need more investigators that are highly trained,” McSally told Raddatz. “We need more special victims councils. We need better data forensics evidence for crimes that are really, really difficult to prove in the first place, even when they’re reported right away. But let’s set the process up for the best success. That’s what the focus is of my legislation this year.”

In the interview, McSally pushed back against criticism that commanders shouldn’t be involved in handling these cases, and that commanders may choose not to prosecute someone they know, telling Raddatz it’s “just not the way that works.”

“The problem is not the ultimate decision whether to prosecute or not by the convening authority, which is usually a colonel or a general,” she said. “The problem is that oftentimes, the case along the way is taking too long. It’s like a cancer rotting in the unit while this case goes on.”

“So there are many relief valves in this process.”

During a Senate Armed Services hearing on military sexual assault in March, the freshman senator made headlines when she told the committee and witnesses that she was “preyed upon and raped by a superior officer.”

“I also am a military sexual assault survivor, but unlike so many brave survivors, I didn’t report being sexually assaulted,” she said at the hearing. “Like so many women and men, I didn’t trust the system at the time. I blamed myself. I was ashamed and confused. I thought I was strong, but felt powerless. The perpetrators abused their position of power in profound ways.”

During the hearing, McSally, who served for 26 years in the U.S. Air Force, said when she eventually did report her experience, she felt “the system was raping (her) all over again.”

“I stayed silent for many years, but later in my career, as the military grappled with the scandals, and their wholly inadequate responses, I felt the need to let some people know I, too, was a survivor,” she said. “I was horrified at how my attempt to share generally my experiences were handled. I almost separated from the Air Force at 18 years (of service) over my despair. Like many victims, I felt like the system was raping me all over again.”

On “This Week,” McSally said it took years for her to “come to terms with what had happened … and the impact that it had” on her.

“Those who are close to me, friends and family and others, are well aware in my journey of healing and my journey of not being crushed by it, but instead being strengthened by what happened to me and being empowered, not just to fight for myself but (for) other women,” McSally said.

“As I think back, I just don’t even know if I would have known where to go at the time. And so, yeah, I really feel like there was a second very deep failure when I tried to — to bring this to the attention of others.”

McSally told Raddatz that she had decided just two days before the hearing that she would tell her story to not just the committee members and media cameras covering the hearing, but to the victims there testifying.

“I decided on Monday night that I was going to share that I was with them,” she said, adding that she “didn’t make that decision lightly.”

“I didn’t realize it was going to be as emotional as it — as it was, but there I was on that day,” McSally said on “This Week. “I’m glad I did it. I don’t regret sharing what I shared and it has been an extraordinary journey since then.”