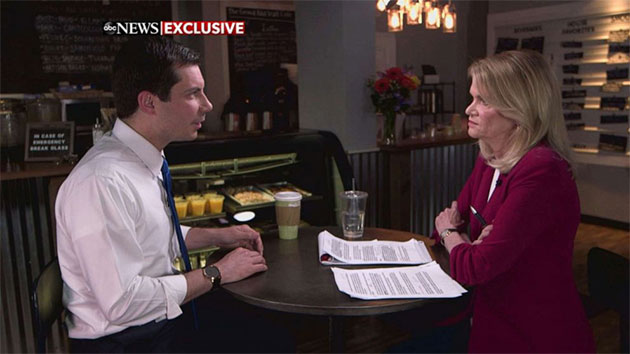 (WASHINGTON) — Tensions between President Donald Trump and House Speaker Nancy Pelosi are at an all-time high, with the party leaders in a war of words with each other and negotiations over infrastructure coming to a screeching halt this week.

The daily drama is turning “into a reality show” — that is, at least, according to South Bend, Indiana, Mayor Pete Buttigieg.

“We’ve got to completely change the channel, and make sure that we respond to all of…the distractions and the nonsense coming out of the White House, not just by calling him to account, but by returning consistently to the question of how American lives are shaped by those decisions or lack of decisions that are happening in Washington,” the presidential candidate said in the interview that aired Sunday.

On Wednesday morning, Pelosi emerged from a closed-door meeting with House Democrats, some of whom were pressuring her to begin impeachment proceedings against the president, and accused Trump of being “engaged in a cover-up.”

The comment came just before she and Senate Minority Leader Chuck Schumer were scheduled to meet with Trump at the White House to discuss infrastructure. But the president, appearing frustrated by the speaker’s accusation, walked out of the meeting to hold a last-minute press conference in the Rose Garden, where he said, “I don’t do cover-ups.”

“To watch what just happened in the White House would make your jaw drop,” Schumer said minutes later during a press conference, alongside Pelosi, who later tweeted she’d be happy to work with Trump “when the extremely stable genius starts acting more presidential.”

Asked by Raddatz on “This Week” if Pelosi should be tuning out the attacks from the president, Buttigieg pointed to her past in which she had stood her ground and gone toe-to-toe with him.

“She’s obviously demonstrated a pretty strong mastery of the ways of Washington and succeeded many times in outmaneuvering the president,” Buttigieg said.

The 2020 presidential candidate admits it’s difficult for anyone to ignore “the nicknames, the tweets [and] the insults,” but said Democrats need to change the channel and remember that “the more we’re talking about him, the less we’re talking about voters.”

“The only way the Republican Party can retain power in the White House is if the conversation is about something completely different, like the shenanigans of the current president,” he said.

Buttigieg has said that Trump has committed impeachable offenses since the release of special counsel Robert Mueller’s report on Russian meddling in the 2016 presidential campaign and possible obstruction of justice by the president, but the mayor has shied away from joining those calling for the proceedings to get underway.

“What’s interesting is the case for impeachment is being made most emphatically by the president himself because it seems like every day or two, there is another affront to the rule of law,” he said.

On foreign policy, as a veteran who served in the U.S. Navy Reserve in the war in Afghanistan in 2014, Buttigieg told Raddatz the time for withdrawal from the country is long overdue.

“When I left Afghanistan five years ago, I thought I was one of the very last troops turning out the lights as I went,” Buttigieg said. “We need to leave. And the reality is, we are leaving. This is pretty much the only thing that the American left and right, and the Afghan government and the Taliban and the international community all agree on is that it’s time for us to go.”

Buttigieg said his plan to get out of the region involves isolating threats “that are specifically related to the homeland” and establishing intelligence and special operations capabilities “to head off those threats” while removing a ground presence.

“That sounds like Joe Biden’s plan from many years ago,” Raddatz pointed out.

“Well, many years ago would have been the time to make good on the idea of leaving,” Buttigieg responded.

Buttigieg said he seeks advice on foreign policy from officials from the Clinton and Obama administrations, and that he tries to surround himself with people who know more on a subject he’s asking about than he does.

“I never want to be the smartest person in the room,” said Buttigieg, who is a Rhodes scholar and graduate of Harvard College and Oxford University. “There’s a new generation emerging. … People I got to know when I was studying international relations at Oxford, for example, who are now professionals in the field. But also people who are twice my age, who have seen this movie before in many ways.”

Buttigieg’s foreign policy platform includes setting a new standard for deploying service members overseas, and with the Pentagon announcing recently that it is sending 1,500 troops to the Middle East in an effort to deter Iranian threats against U.S. forces, he said “escalation is the last thing we need.”

The request for troops in the Middle East came from U.S. Central Command (CENTCOM). When asked about the troops, Buttigieg acknowledged that there had been a pattern of “misbehavior and provocation by the Iranians” and that he couldn’t “weigh in on intelligence” that he hadn’t seen.

The mayor said walking away from the Iran nuclear deal made the U.S. “look foolish,” and that if he were president, he would seek to rejoin the deal in an effort to stop the country from obtaining nuclear weapons.

“We didn’t do the Iran nuclear deal for them. It wasn’t a favor. It was something that we did in order to make America safer, and withdrawing from it has made America not only less safe but also less credible the next time we go into a deal,” Buttigieg said.

A “thorny issue” for Buttigieg lies in the current talks between the United States and North Korea. He said Trump handed the country “legitimacy” when he agreed to host a summit.

Buttigieg said diplomacy has not worked during the latest discussions, and that he doesn’t see the Trump administration coming to a solution. He said it’s likely to be difficult for the next president, too, but that he sees a pathway to pursuing peace and denuclearization that could benefit both countries.

A country that could guide talks with the North Koreans is China, but the Unites States is currently in a heated trade war with the Chinese.

Recently, the president authorized a $16 billion bailout for American farmers hurt by the trade war, something Buttigieg calls a “Band-aid” that does not fix the core issue.

“The underlying problem is that these tariffs, which are taxes paid by Americans, are coming down on the backs of American farmers, American workers and American consumers. And I think when American consumers find that they’re paying, on average, $831 a year now in tariffs implemented by the Trump administration, there’s going to be outrage at action that does not seem to have a strategy behind it,” Buttigieg said.

Leading up to the Memorial Day weekend on Thursday, Buttigieg took part in a discussion with the Washington Post when he accused Trump of faking a disability to avoid the draft for the Vietnam War, an issue that also arose during the 2016 election.

Trump was exempted from military service in the 1960s after receiving a letter from a doctor, saying he had a bone spur ailment in his foot.

He told Raddatz that “there is no question” that the president used bone spurs as an excuse to avoid service.

“I think to any reasonable observer that the president found a way to falsify a disabled status, taking advantage of his privileged status in order to avoid serving,” he said.

Buttigieg said Trump’s behavior was “an assault on the honor of this country.”

“For that person now to be in a position, at the stroke of a pen, to order American troops into battle is a disturbing fact that I think we need to weigh as a country,” Buttigieg said.

The mayor also criticized Trump for considering pardons for some service members who have either been accused or convicted of war crimes.

“The idea that being sent to war turns you into a murderer is exactly the kind of thing that those of us who have served have been trying to beat back for more than a generation,” Buttigieg told Raddatz in response to the president’s statement.

He said that troops are protected “morally and physically” by knowing that “if anybody in uniform does commit a crime, they will be held accountable.”

“For a president, especially a president who never served, to say he’s going to come in and overrule that system of military justice undermines the very foundations, legal and moral, of this country,” Buttigieg said.

Buttigieg has maintained a presence as a formidable candidate for the presidency in 2020, maintaining a spot near the top of polls among 22 other Democrats in the race.

For him, national politics was always a goal, saying in an interview with The South Bend Tribune when he was 18 years old, “I think I could pull it off, it’s a tremendous challenge, a kind of sexy challenge but I want to give it a try.”

He told Raddatz that he was always interested in public service, but thought that he was going to be a journalist or a scholar. He never anticipated he would be running for president of the United States at the age of 37, he said.

“But what I found is that moments will sometimes find you a little bit,” Buttigieg said. “You’ll notice an alignment between what you bring to the table, and what the moment calls for. And what I see now, among other things, is a moment where, globally, there’s a new generation of leaders stepping up. From France to New Zealand, you see people who are the same age or younger than I would be on Inauguration Day. To me, that’s the kind of trend America should be leading, not catching up to.”