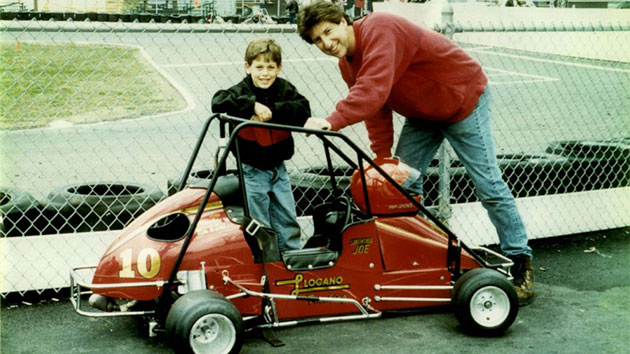 (CONCORD, N.C.) — The first time reigning NASCAR champion Joey Logano got behind the wheel was when he was 6 years old. He tore up his Connecticut neighborhood in a go-kart, a Christmas present given to him by his parents.

That go-kart changed his life.

Logano, who drives the No. 22 Ford Mustang for Team Penske, stunned racing fans last November when he clinched the NASCAR Monster Energy cup series championship as the underdog, beating out rivals Kyle Busch, Kevin Harvick and Martin Truex Jr. at Homestead-Miami Speedway in Florida. Logano was the youngest driver to win in 15 years and his victory was the first cup series title for Ford Motor Co. in 14 years.

Being a champion hasn’t changed the lithe, unassuming and affable Logano.

Logano, 29, latched on to NASCAR early, watching the races at a young age and convincing his parents to invest in his burgeoning hobby. Racing — not college — was his dream.

“I sign my name Joey Logano RCD. Race Car Driver,” he said. “I feel like I have a degree in racing. No one really ever said, ‘Hey, you should have a backup plan.’ My plan was to be a professional race car driver. I was 15 years old when I got signed up [to drive] a race car for someone else. My eggs were all in one basket. I had to make it work.”

Logano has won one race so far this season, securing a spot in the playoffs beginning in September. He said his sole focus is defending his NASCAR title. But Logano recognizes that every driver has a shelf life.

“I don’t want to go out there and run 15th every week,” he said. “I am not going to have fun doing that. I love winning. I hate losing even more. I know at some point I am going to lose a little bit of that edge … and may have to work in different ways to keep that edge. We have seen drivers racing into their mid-40s and be very competitive. I still have a long ways to go in my career.”

When asked if he would consider trying his luck in Formula One, the pinnacle of European motorsports, Logano was circumspect.

“I would like to try it. I am not sure I would actually want to do that for a living,” he said. “I don’t want to say never. For me, I grew up loving NASCAR racing. My passion lies in stock cars. We’re not worried about ripping a wing off. We’re going to rub fenders and it’s going to be a lot of fun and we’re going to laugh about it or maybe throw punches afterward.”

He would, however, jump at the opportunity to test his limits and stamina in the prestigious 24 Hours of Le Mans, one of the oldest automobile races in the world.

“I would love to try that,” he said with a smile. “Hopefully someday that can happen.”

These days Logano’s free time is limited, even in the off season. When he’s not with his wife Brittany and 16-month-old son Hudson or attending sponsor-related events, he can be found tinkering with his own cars: a Ford F-150 Raptor truck, 1924 Model T and Ford GT supercar.

“I bought a Ford GT a couple of years ago,” he said. “That was a pretty big splurge but totally worth it. I’ve put some miles on it. VIN number is 22 [his racing number]. So it’s a real special car.”

To NASCAR fans, the drivers are the celebrities. But in reality the sport is a team effort and hundreds of people can work on one driver’s car. If Logano performs poorly in a race, he shares the blame.

“I make plenty of mistakes, believe me,” he said. “My car’s not always perfect either. We have 400 employees at Team Penske building race cars. There are so many people that go into this. I am just a piece of the puzzle.”

Some drivers believe in good luck rituals before a race. Dale Earnhardt would reportedly enter and leave a building through the same door. Sterling Marlin ate a bologna sandwich. Others refuse to shave on race day. Not Logano.

“I’m not superstitious at all,” he said. “I don’t believe in luck.”

Men still heavily dominate NASCAR and this year’s roster is no exception. Superstar Danica Patrick, who retired from racing in 2018, helped inspire young girls to pursue motorsports. But more needs to be done to increase the number of female drivers, Logano argued.

“I think it would be very healthy for the sport,” he said. “There are a few females coming up right now that have a good amount of talent.”

As for that NASCAR trophy, Logano is finally looking forward to bringing it home.

“The championship trophy is on tour. To be honest I don’t know who has it right now,” he said with a laugh. “We decided to give everyone on the race team the trophy for a week to take home. I know it’s going to get scratched up, things are going to happen, but it will have some cool stories, neat pictures and I wouldn’t have it without them.”