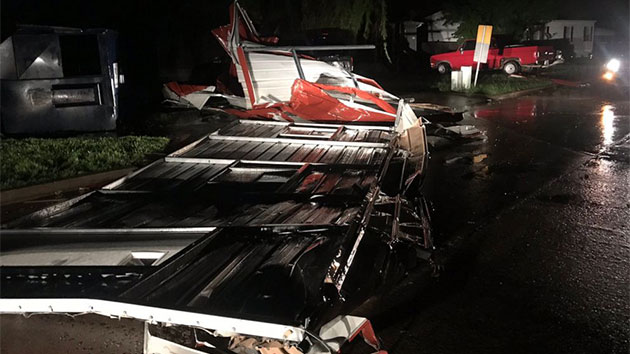 (RENO, Okla.) — At least two people were killed and 29 injured, some critically, when a tornado ripped through an Oklahoma City suburb in the middle of the night, wiping out a hotel, a mobile-home park and several other buildings.

The National Weather Service confirmed Sunday that a tornado hit El Reno, a town with a population of nearly 20,000, on Saturday night.

El Reno Mayor Matt White said at a news conference Sunday morning that the two deaths occurred in the area of a mobile-home park where the twister touched down about 10:30 p.m.

He said search-and-rescue teams were conducting grid searches through the devastated area, “picking up walls of debris to make sure nobody is under there.”

He said an unknown number of people are still unaccounted for.

White said 16 people were taken by ambulance to hospitals from the epicenter of the disaster zone and another 13 were raced to hospitals in private vehicles. He said injuries ranged from minor to critical, and that several people were undergoing surgery at the Oklahoma University Medical Center in Oklahoma City.

Emergency officials said the tornado cut a 2-mile long, 200-foot wide swath through the community, and that debris was carried more than 4 miles northeast of El Reno.

The mayor said preliminary indications are that the twister was a category EF-2 or EF-3, meaning wind speeds ranged from 111 to more than 200 miles per hour. National Weather Service said the tornado was at least an EF-2 on the intensity level scale that goes to EF-5.

Video showed the devastation. The tornado hit the hotel, an American Budget Value Inn, on Interstate 40, ripping off most of its second floor, and reducing much the structure to splintered pieces of wood and shattered glass.

“As far as we know right now, there is no one in the rubble,” the hotel’s owner, Ramesh Patel, told ABC Oklahoma affiliate KOCO-TV.

A woman who was working in the office when the tornado hit suffered a broken leg, Patel said.

White confirmed that everyone at the hotel when the tornado struck has been accounted for.

At sunrise Sunday, video showed a mobile-home park next to the hotel strewn with shattered glass, wood and other debris that just hours earlier were residences of a thriving community. Aerial footage showed the twister slammed residences in a corner of the mobile-home park while leaving other homes virtually unscathed.

Several vehicles were overturned and others were smashed by debris.

A woman who survived the tornado told KOCO that she and her two grandchildren escaped their mobile home only to find themselves in the middle of a “disaster zone.”

“We heard screaming and stuff, children and adults both,” she said. “A lot of destruction, a lot of chaos and a lot of death … just bodies everywhere.”

After striking the mobile-home park, the tornado hit the hotel and a nearby Dodge dealership, tearing the roof off the business, aerial footage showed.

“We have absolutely experienced a traumatic event here in El Reno,” White said. “We had an incident where a tornado hit a mobile-home park, a hotel, and several businesses.”

White asked people to stay away from the area while search-and-rescue teams continue to pick through the rubble from the hotel and mobile-home park.

“I think El Reno, Oklahoma, needs a lot of prayers. It’s been a traumatic experience,” White said. “None of this is easy. We’re all shook up.”

“Please pray for those affected by these storms as well as the emergency services workers assisting in this ongoing rescue,” police said in a statement posted to Facebook. “This is an unfortunate example of just how quickly these types of storms can develop from a simple thunderstorm into a deadly supercell tornado.”

A National Weather Service meteorologist confirmed the catastrophic weather event was a tornado by analyzing radar images and seeing a “debris ball” in the area, and by detecting telltale evidence of a twister by examining pictures of the damage and eyeballing the devastation in person, officials said.

The tornado that hit El Reno comes on the heels of a very active severe weather week in the Southern Plains. There were 104 tornadoes reported across eight states — Texas, Oklahoma, Kansas, Nebraska, Missouri, Iowa, Illinois, and Maryland — from Monday to Thursday.

Three people were killed in Golden City, Missouri, on Thursday as a tornado moved through the region. The state’s capital, Jefferson City, about 170 miles northeast of Golden City, also suffered severe damage the same night from a tornado, but no one was killed.

At least four other people were also killed from storms, including flash flooding, in the central U.S. this week.