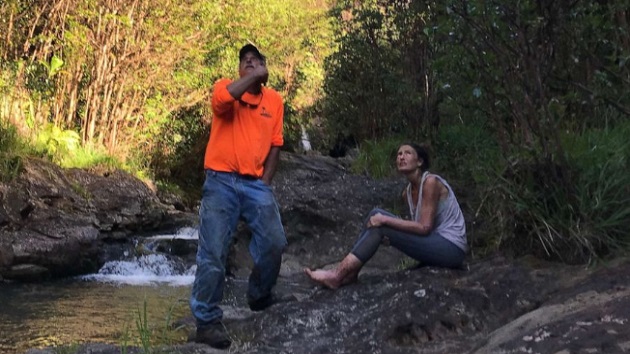 (HONOLULU) — A woman missing for over two weeks in the Makawao Forest Reserve on Maui, Hawaii, has miraculously been found alive, a family friend and rescuer confirmed to ABC News.Amanda Eller had been missing for 16 days when she was found in good condition at about 5 p.m. local time.”We found her in a stream bed, she was waving up at us while we were in the helicopter, and we got her out nice and safe,” Chris Berquist, who was in the helicopter, told ABC News Radio late Friday. “She was not injured. She has a little bit of exposure from the sun, a little bit of sunburn. She lost her shoes a few days in. But no injuries.”Photos shared by one of the rescuers showed ugly burns to Eller’s feet and ankles.Eller, 35, disappeared after apparently going for a hike on May 8. Her boyfriend was the last person to see Eller, a yoga teacher and physical therapist, on that morning, but when she did not return home he reported her missing to police on May 9.Eller’s SUV was found Thursday, not long after she’d been reported missing, at the base of the Kahakapao Trail.Sarah Haynes, a friend who ran the “Find Amanda” Facebook page organizing the search, told ABC News that Eller was located by a search helicopter Friday afternoon in a ravine near Twin Falls. Eller was able to flag down the helicopter, Haynes and Berquist said.Eller was in good condition, considering the circumstances, and spoke to her father via the helicopter. She was met by an ambulance at the helipad and taken to Maui Memorial Hospital.”She was very alert, she knew her father’s phone number, she knew who she was, where she was, knew exactly how long she had been out there — very surprised to see us,” Berquist said. “I’ve never felt something quite that overpowering.”Haynes said her friend had been living on water and plants.”She was in deep deep H’aiku,” Berquist said. “She was several miles above Twin Falls, over in deep H’aiku, way off the beaten track.”Earlier in the day, just hours before she was found, the reward for finding Eller was raised to $50,000.”I haven’t seen [the family] yet, but while I was assessing her up [another rescuer] made the call to the father and let him know. I think there was some disbelief there — ‘Are you serious? You really found her?’ — and then just explosions on both ends,” Berquist said.Her boyfriend, Benjamin Konkol, told ABC News on May 16 that he believed she was still in the forest and did not suspect foul play.”She’s my soulmate, she’s the love of my life and I feel that she’s still out there. … I’d really like to stop spending my evenings alone and have my love back,” he said at the time.Her family and friends had feared the worst, despite holding out hope she would be found.”It’s been a normal range of emotions, of being fearful that the worst could happen,” Julia Eller, Amanda’s mom, told Honolulu ABC affiliate KITV last week. “I don’t want to be there. I do firmly believe that Amanda is still alive, but occasionally those doubts creep in and I try to dispel them as I can.”