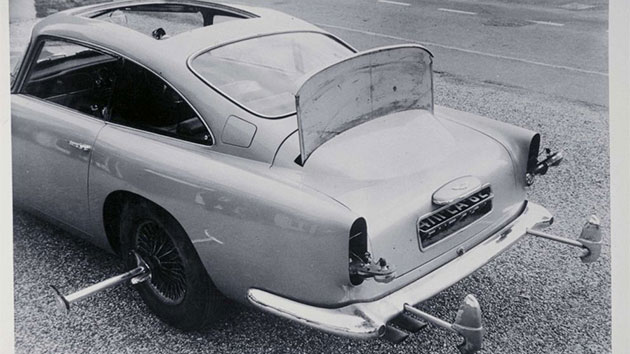 (LONDON) — It’s what every James Bond fan has dreamed of owning: an Aston Martin DB5 that contains the very devices agent 007 deployed to elude his malevolent enemies in the classic 1964 film “Goldfinger.”

There’s just one catch: these special edition cars are not road legal.

They will, however, come as close as possible to the one made famous by Sean Connery. Built at Aston Martin Works in Newport Pagnell – the so-called spiritual home of the company and original factory where the DB5 sports car was manufactured between 1963 and 1965 – the $3.5 million (2.75 million pounds) Goldfinger DB5 edition car is painted in Silver Birch, the original car’s color.

“There has been significant global interest in this car,” according to an Aston Martin spokeswoman.

To get the cars just right, Aston Martin teamed up with Chris Corbould, the Oscar-winning special effects supervisor with EON Productions, the company that shares the rights to the Bond films with MGM Studios.

The majority of the 25 DB5 continuation cars have already been sold and customer deliveries begin in 2020. Aston Martin, leveraging its long-standing association with the Bond franchise, announced May 22 that it would celebrate the 50th anniversary of “On Her Majesty’s Secret Service,” the sixth Bond film starring George Lazenby as the fictional spy, with 50 limited edition DBS Superleggeras.

Lazenby drives an Olive Green DBS in the 1969 action flick and the special edition Superleggeras will be an authentic reproduction of the movie car.

A grayish Alcantra fabric lines the interior of the special edition DBS Superleggera, exactly like the original. The cockpit has red accents, a nod to the red-trimmed glovebox in the DBS, which safeguarded Bond’s telescopic-sight rifle.

The first Bond-inspired Aston Martin was the DB9 GT, which marked the release of 2015’s “Spectre.” Only 150 were produced and each limited-edition DB9 featured 007 badging and bespoke themed accessories.

“The continuation cars are so close to the original, you can close your eyes and believe it is,” Mike Duff, European editor of Car and Driver, told ABC News.

The risk could be that someone foists a continuation car as authentic. Original DB5s are incredibly rare and sell for millions of dollars. Duff expects some owners may even take the Goldfinger DB5 on local roads.

If caught by authorities … well, owners can try their best James Bond impersonation.

Even as Aston Martin struggles to sell new models like the Vantage, the continuation cars will help the luxury automaker return to its roots and inject enthusiasm into the storied marque, he noted.

“They believe the James Bond connection is very important,” Duff said. “Aston Martin may not have survived without the DB5 in ‘Goldfinger.’”

The excitement may even inspire other automakers to produce their own continuation cars.

“This could be a phenomenon,” Duff said.