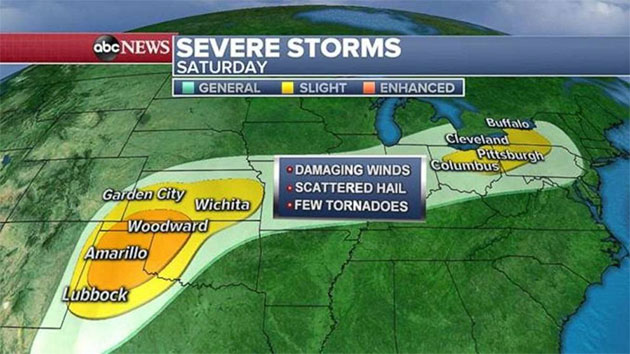 (NEW YORK) — The storm system that brought the tornado outbreak from the Plains to Mid-Atlantic spawned 104 reported tornadoes across eight states from Texas to Maryland is long gone, but the holiday weekend will not be a quiet one.

A new storm system that began in the Plains on Thursday has brought 24 reported tornadoes in the last 48 hours across eight states: Texas, Oklahoma, Kansas, Missouri, Iowa, Illinois, Minnesota and North Dakota.

These storms are also bringing very heavy rain to places that are already very saturated. Parts of Kansas received up to 4 inches of rain on Friday.

With the continued threat of heavy rain over the next several days, many rivers are in major flood stage and rising along the Mississippi, Missouri and Arkansas rivers.

A stationary front draped across the central U.S. will continue to bring the threat for severe storms in the Southern and Central Plains, across the Texas Panhandle, western Oklahoma and much of Kansas on Saturday.

In the enhanced risk region the biggest threat will be large hail, but isolated tornadoes and damaging winds are expected. Flash flooding also remains a major concern, especially in Oklahoma and Kansas.

A second severe weather concern exists across parts of the Ohio Valley and Great Lakes, including Pittsburgh, Cleveland and Buffalo, New York. The main threat Saturday afternoon will be damaging winds, but hail or a brief tornado can’t be ruled out.

The same regions are under a severe threat on Sunday – across the Plains from Texas to South Dakota and a smaller area in the Ohio Valley, from Indianapolis to Columbus, Ohio.

The stalled system will continue to bring rounds of severe storms and heavy rain across the Plains on Sunday, with the enhanced risk region in the Texas and Oklahoma panhandles, western Kansas and southern Nebraska.

Heat is on in Southeast

In the Southeast, scorching hot temperatures are on the way over the holiday weekend and into next week, with some spots hitting triple digits.

The heat index numbers for Sunday are in the high 90s across much of the region. Record highs are possible in this area over the next several days.