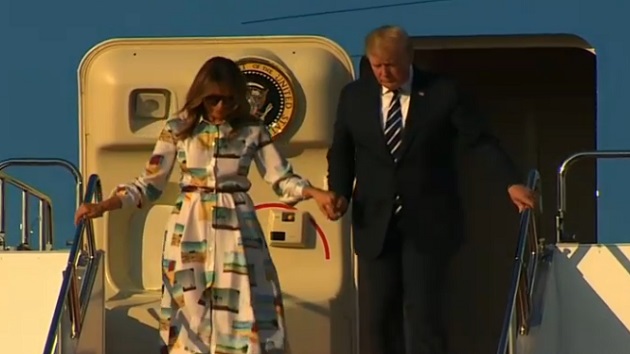 (TOKYO) — President Donald Trump sought to soothe concerns from the Japanese business community over dinner on Saturday night, as the U.S. trade war with China has rocked the region and the U.S. tries to hammer out a trade deal with Japan.”The relationship with Japan and the United States, I can say for a fact, has never been stronger. It’s never been more powerful, never been closer,” Trump said. “This is a very exciting time for commerce between the two countries that we both love.”Guests at the dinner at the U.S. Ambassador’s Residence included top executives from Honda, Mazda, Nissan and Toyota, whose companies are concerned about the president potentially crippling their industry by slapping steep tariffs on the Japanese autos.Last week, the president was faced with a deadline to impose tariffs on Japanese automobiles, citing national security concerns. Instead, the president pushed the deadline back while trade negotiations continue.The U.S. has already imposed tariffs on Japanese aluminum and steel.While White House and Japanese officials have tried to downplay the potential for any big announcement of a bilateral trade deal on this trip, the president previewed some of the progress he hopes to make while in Tokyo.Trump said the new deal will “address the trade imbalance.””The United States and Japan are hard at work negotiating a bilateral trade agreement which will benefit both of our countries. I will say that Japan has had a substantial edge for many, many years,” Trump said. “But that’s OK. Maybe that’s why you like us so much. But we’ll get it a little bit more fair.”The United States currently has a $67.6 billion trade deficit with Japan.The president said he hopes the deal will “ensure fairness and reciprocity in our relationship.””We’re getting closer,” Trump said. “We welcome your support in these efforts and we hope to have several further announcements soon and some very big ones over the next few months.”The president and first lady Melania Trump, wearing a white printed dress, were greeted at the airport by Japan’s Minister of Foreign Affairs Taro Kono, the U.S. Ambassador to Japan William F. Hagerty and other members of the US and Japanese diplomatic corps at about 4 p.m. local time.Just hours before the president landed, an earthquake of magnitude 5.1 shook the city of Tokyo. The epicenter of the earthquake was west of Tokyo in Chiba Prefecture, an area near where Trump and Abe are expected to golf on Sunday, according to The Associated Press. There were no reports of significant damage.Copyright © 2019, ABC Radio. All rights reserved.